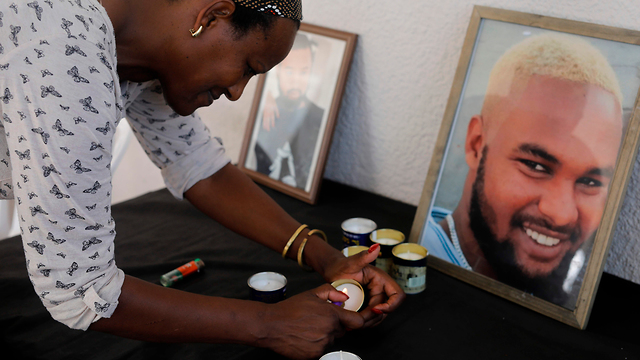 Preliminary internal investigation reveals the police officer who fatally shot Solomon Tekah aimed the gunfire toward the floor which then ricocheted and hit the 19 year old; shooting sparked widespread protests by Ethiopian community across Israel

The off-duty police officer who fatally shot an Ethiopian teenager, sparking massive protests across Israel, opened fire in the direction of the floor which ricocheted and hit the 19-year-old man, the preliminary internal investigation revealed.

The legal team of Solomon Tekah’s family on Monday met with the representatives of the Police Internal Investigations Department, who presented them with the findings of the preliminary investigation.

The representatives, however, did not elaborate on the type of punishment they will be seeking for the officer.

The internal investigation’s department confirmed the meeting, saying the gunfire was indeed aimed at the floor as an act of self-defense, after the officer apparently reenacted the incident at the scene of last Sunday’s shooting near the northern city of Haifa.

"The findings of the investigation support the defense's claims that the officer acted in self-defense without any intention of harming the deceased," said Yair Nedshi, the officer’s defense attorney.

"So far a series of forensic tests have been conducted as far of the investigation, including pathological analysis, ballistics tests, weapons testing and forensic examination of the scene of the shooting,” said Police Internal Investigations Department.

“The findings of the tests conducted so far tests support the claim that the bullet first hit the ground, ricocheted off the ground and hit the deceased, resulting in his unfortunate death."

The internal investigations department emphasized, however, the investigation is still ongoing and “it's impossible to draw a decisive conclusion about the course of events that led to the tragic outcome.”

Last week, at least 111 officers and dozens of protesters were wounded, and 136 people were arrested during widespread demonstrations across Israel. The protests, which swiftly turned violent, were held at major interchanges and roads across the country on Tuesday evening, after Tekah’s funeral.