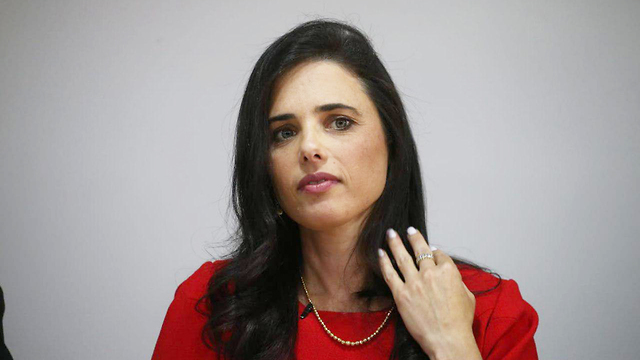 Netanyahu urged to give Shaked a top spot on Likud list

Some Likud members are urging Prime Minister Benjamin Netanyahu to reconsider an earlier decision and offer former justice minister Ayelet Shaked a guaranteed spot on the top of Likud's list of Knesset canddidates ahead of the September 17 elections.

Netanyahu previously declined to give Shaked a shortcut into his party and insisted she join compete in primary elections. The decision effectively ensured that she find a political home elsewhere.

Netanyahu also fired Shaked and her political partner Naftali Bennett from their positions as ministers in his caretaker government.

Shaked is expected to leave the New Right, the party she formed with Bennett ahead of the April 9 elections, which failed to pass the required threshold to enter the Knesset.

Now, some Likud members fear Sjhaked might join forces with Netanyahu's political rival Avigdor Lieberman, and bring with her potential votes that could prove crucial for Likud's chances of winning in the country's second snap elections of the year.

"refusing to bring Shaked into the Likud puts the Likud's leadership in jeopardy," Netanyahu loyalist MK Miki Zohar said Monday, as he asked Netanyahu to reverse his earlier decision.

Shaked was considered an affective minister for conservative, right-wing voters whose agenda included curbing the Supreme Court's ability to block laws passed by the Knesset, which was deemed unconstitutional.

Since the new elections were called in May, Shaked has been silent about her political plans, and is said to be considering her options.

One option reportedly considered was re-joining the Jewish Home Party, which she and Bennett abandoned prior to the last election. But her condition that she be given the leadership of the party was a non-starter for current Jewish Home chair Rafi Peretz, although second on the list Bezalel Smotrich recognized Shaked's electoral value and offered her his spot.

According to a report on Israeli radio Monday, Smotrich enhanced his offer to Shaked by promising her a return to the Justice Ministry, a post he had demanded for himself,  should the party join a Netanyahu-led coalition after the next elections.