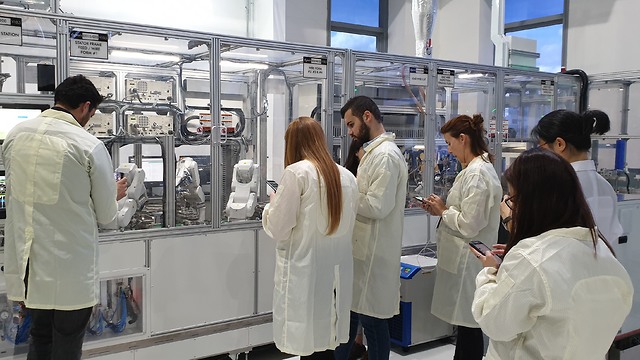 CEO of company founded by 'British Elon Musk' says it is in contact with Israeli start-ups across the fields of artificial intelligence, machine learning, battery and sensor technology, as well as with many cyber companies born out of military experiences

Is Israeli technology the future of electric cars for the British Dyson company?

Dyson CEO Jim Rowan says the company has scouts in Israel and is in contact with Israeli start-ups across the fields of artificial intelligence, machine learning, battery and sensor technology, as well as with many Israeli cyber companies that were born out of military uses.

At a meeting in Singapore with journalists from Europe and Israel, Rowan said that Dyson is constantly expanding its research centers and plans to open new ones. However, he refrained from specifying whether one of their R&D centers will be opened in Israel.

”We are examining additional locations for expansion,” he said. “We’re searching where our next lab will be, where our next talent will come from, how we will create differentiation, and I believe that we’ll reveal our decision this year.”

Dyson has already incorporated Israeli technology into its products.

One example is the "BreezoMeter," developed by an Israeli start-up monitoring personalized and accurate outdoor air pollution and pollen data. It is integrated into Dyson’s air purifier and connected to a mobile app.

The company is also looking for advanced technological batteries in Israel to forward its goal of innovative “solid state” batteries and are looking for new technologies for its entire range of products and not just for its car.

The company transferred its management offices to Singapore last year, where it has its R&D center as well as its advanced electronic engines factory. It is here that they plan to make their new car.

Company founder James Dyson was heralded as “The British Elon Musk” when he declared his intent to put an electric car on the market with a $2.8 billion investment two years ago.

This announcement stirred a lot of interest due to the technology it is expected to include.

Dyson also announced the establishment of a testing facility for its electric car with 16 kilometers of test tracks at an investment of 150 million dollars.

From the few details that have leaked, it appears that Dyson’s car will be a low car with large, narrow wheels to allow for driving over rough terrain. It will also be energy efficient.

The company is being very secretive with regards to the car which will help to contribute to the hype nearer launch time.

Rowan himself speaks with reserve about the car, perhaps due to his fear that high expectations might not be realized.

“This is mostly an engineering project, a complex project. It should not be taken for granted that we’ll enter the market and immediately be successful" Rowan said.

"The big challenge is bringing all of our capabilities together and building an electric car that can compete as the best in its class.”