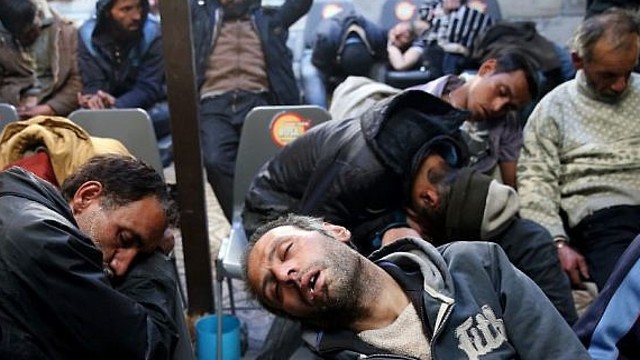 The Islamic Republic lies at the heart of the infamous Golden Crescent of drug smuggling, and faces a growing substance-use problem; after former president Ahmadinejad reduced the number of services for addicts, the recent financial crisis draws 'young people who don’t have any hope in the future' into addiction and abuse

Iran has a growing substance-abuse problem, particularly with respect to drugs. In a country where alcohol is illegal and the death penalty applies to drug offenses, tight restrictions have not reduced the number of users. The government acknowledged as much last year when it changed its drug policy in an attempt to lessen the level of drug offenses eligible for executions.

Drugs addicts in Iran
According to the Brookings Institution in Washington, Iran has between 2 million and 3 million substance abusers out of a total population of about 81 million, while the Iranian Drug Control Headquarters puts the substance-abuse figure at 2.8 million. According to figures from the World Health Organization, 1 percent of the Iranian population aged 15 or older suffered from alcohol-use disorders in 2016. Masood F., an Iranian delegate to the 25th Alcoholics Anonymous (AA) World Service Meeting, held in Durban, South Africa, last October, has seen an increase in the number of people attending AA meetings. “AA is very popular in Iran. Unlike when I first attended treatment… there are many meetings today, every day,” he said. “We have many alcoholics and addicts, and maybe they are hidden in our community.” All of this has taken a toll on Iranian society, and stigmas associated with a substance-use disorder impedes many from seeking treatment. Masood said he started drinking alcohol as a child. “At the beginning, it was fun. I was a young boy and we used it at parties. It was illegal, which made it more enjoyable to use,” he said. “I didn’t know anything about alcoholism,” he went on, adding that it eventually damaged part of his liver. “By then, I was familiar with drugs and started using opium while I was in the university.” Masood went to several rehabilitation clinics, but without success. “The doctor told my mom that I’m a hopeless case,” he said. Apparently, it took hitting rock bottom to start the process of recovery. “I lost everything I had: my reputation, my self-respect,” he added.

According to Dr. Ali Farhoudian, a psychiatrist in Iran, the majority of people there suffering from substance-use disorder are men.

He contends that while women consist of less than 10% of substance users, the gender-gap ratio is narrowing, adding that this is because Iranian society has become more open to women.

“I think the accelerating trend is due to a recent onset of women’s socializing in Iran; therefore, they may experience much more social-adverse effects like addiction compared to previous decades,” Farhoudian said. He adds that opium is the most common drug in Iran, followed by cannabinoids.

“For ages in Iran, some types of drugs were used recreationally and it was socially accepted,” Aaraj said, adding that while there had been executions for drug-related offenses before 1979, the Iranian government started cracking down on drugs under the guise of Islamic law. There are numerous contributing factors as to why substance-use disorder has proliferated in Iran. For example, Aaraj contends that former president Mahmoud Ahmadinejad reduced the number of services available for people with substance-use disorder. “Iran was a model for the region and even for the world in terms of services for harm reduction,” he said. “They still have harm-reduction activities, but not like before.” Masood cites a lack of proper, professional rehab facilities. “The (rehabs like you have in America) are very rare here. There are no recovery consultants or pools or massages. Most are simple and plain,” he stated. Farhoudian disagrees. “Iran enjoys having a vast network of treatment centers that consists of over 7,000 outpatient treatment centers equipped with methadone and buprenorphine both of which are used to treat addiction, thousands of short-term residential centers, several therapeutic communities, addiction wards at the hospital and NGOs, including 12-steps…,” he said. According to Farhoudian, treatment is an important part of addressing the country’s problem. “Reducing the number of addicts is an important goal through primary prevention strategies,” he said. “However, treatment and harm-reduction services are as important as trying to decrease the numbers.”

He contends that the number of drug users in the future will be contingent on the financial well-being of the country and whether people feel confident about their security and upcoming prospects.

The current relationship between Iran and the United States, particularly after the Trump Administration withdrew from the 2015 Iranian nuclear deal, appears to be exacerbating the situation.

“Unfortunately, on account of the current US sanctions and threats, most people in Iran are not experiencing a very stable situation…,” Farhoudian said. “It may affect future drug use in Iran and its extensions to… neighboring countries and even European ones.”

Along with Pakistan and Afghanistan, Iran is part of what is historically known as the Golden Crescent, an area well known for drug smuggling.

Many drugs flow into Iran from Afghanistan, particularly poppy, from which opium and heroin are created. These drugs then go to Europe and other places in the Middle East.

With the increase in number of addicts in Iran, more drugs have flowed into the country. This has had a spillover effect on neighboring Iraq, which has seen its own drug problem exacerbated by drugs and drug smugglers from Iran.

Iranian customs officials seize 37kg of crack cocaine in the wheel of a truck on the Iran-Afghan border in January 2017
MENAHRA’s Aaraj, too, points to Iran’s deteriorating economy, which is suffering from high rates of inflation and effects from the reinstated US sanctions. “Iran has tough economic problems, which is particularly tough on the young people who don’t have any hope in the future,” he said. “They might use drugs to escape the current situation, which is not good.”

As Masood said, “addicts are the people who cannot tolerate the real world.”