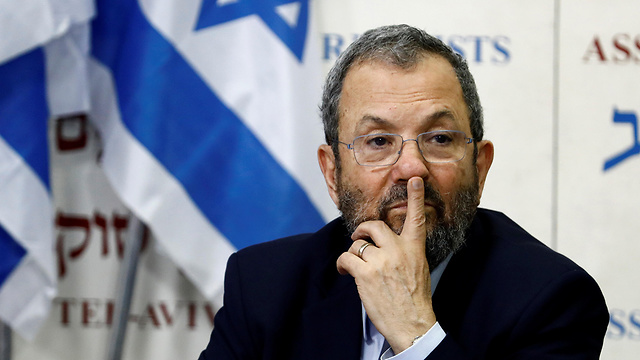 Reports in Israeli media suggest Ehud Barak received over $2 million in grants last decade from a company belonging to Epstein, who on Monday was charged with sex trafficking of underage girls, some of whom were as young as 14 year old

Former Prime Minister Ehud Barak is playing down his ties with Jeffrey Epstein, the U.S. financier jailed on sex-trafficking charges. Barak's connection with the Jewish billionaire has emerged in Israeli media just days after the 78-year-old former premier announced his political comeback in a bid to unseat Prime Minister Benjamin Netanyahu in September 17 elections.

Former Prime Minister Ehud Barak (Photo: Reuters)
According to the media reports, Barak received over $2 million in grants last decade from the Wexner Foundation when Epstein sat on the group's board. Netanyahu accuses the media of remaining "silent" about the matter. In a radio interview Thursday, Barak said he met Epstein several times, but said he "didn't support me or pay me." He said he has met many people over the years, including some involved in "problematic things," such as Harvey Weinstein.

"I also met Netanyahu," he quipped.

Epstein was charged with sex trafficking on Monday, as prosecutors accused him of luring dozens of girls as young as 14 to his luxury homes in New York and Florida and paying them for sex acts.

An indictment unsealed in federal court in Manhattan said Epstein, 66, "intentionally sought out minors and knew that many of his victims were in fact under the age of 18, including because, in some instances, minor victims expressly told him their age."

Epstein, whose friends have included President Donald Trump, former President Bill Clinton and Great Britain's Prince Andrew, was arrested last Saturday at an airport near New York City after his private jet touched down from France.