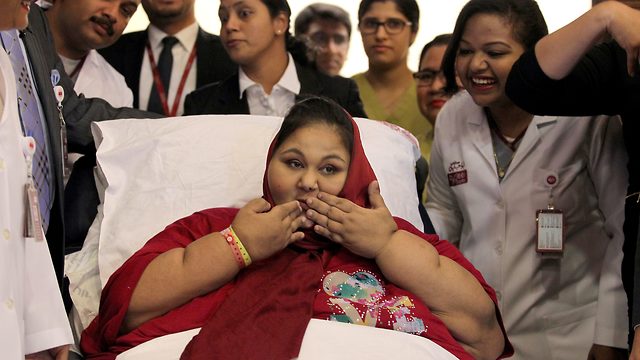 In the Middle East, obesity is a growing epidemic

Obesity in UAE is double the global average; in Kuwait, more than 50% of the adult population suffers from diabetes linked to this condition, and some 75% of Egyptians are overweight; medical professionals put blame on the desert climate

On a recent family outing to a mall in Abu Dhabi, it took all of Rawan Moammar Floyd’s self-control to do nothing as a boy bought ice cream. “I was about this close from stopping him. He was extremely obese,” said the 35-year-old ballroom dancer and first-time mother who moved from her native Jordan three years ago.

Egyptian national Eman Ahmed Abd El Aty blows a kiss during a press conference on July 24, 2017, at the Burjeel Hospital in Abu Dhabi where she was receiving treatment following drastic weight-loss surgery
Floyd was one of the winners of the recent “Take the Stairs” challenge initiated by Dr. El Zaqui Ladha, a consultant in bariatric and general surgery at Bareen International Hospital in Abu Dhabi, to create awareness about the growing obesity problem in the country, where health authorities estimate that up to 40 percent of its children are either overweight or obese.

“To be honest, it saddens me to see this, especially with kids,” says Floyd, who recently lost the 55 pounds (25 kilos) she had put on during her pregnancy.

“In Aqaba, where we lived, we still went out and played all different kinds of sports. I understand that it is hot here, but the UAE provides people with lots of indoor activities; the problem is people are not willing to do them.”

While not a problem limited to Gulf Cooperation Council countries – one study in the New England Journal of Medicine found that about 10% of people in the world are obese – Ladha noted in an email that according to statistics, obesity in the UAE is double the global average.

There are also increasing numbers of people in the UAE with Type 2 diabetes, which is linked with being overweight, he added.

Another Gulf country, Kuwait, has one of the highest rates of adult diabetes in the world, with more than 50% of the adult population suffering from the disease, notes Prof. Iris Shai, a researcher in nutrition and chronic disease at Be'er Sheva’s Ben-Gurion University of the Negev. “Nobody walks or does many physical activities outdoors in the Middle East due to the hot weather, and people get lazier (about making) any effort,” Ladha says. He also attributes the increase in obesity to easy access to the growing number of fast-food chains in the area, the rising number of private car ownership, and all other urban life conveniences, which easily lead to a more sedentary lifestyle and unhealthy eating habits.

Stocking up on sweets at the start of Ramadan in Baghdad (Photo: Archive/AP)
“Life has become much easier and much more convenient after the discovery of oil in the GCC,” he says, noting that processed foods high in sugar, salt, oil and salt imported from the West are replacing the healthier traditional diet of dates, wheat, camel milk, vegetables and meat. Health experts attribute two-thirds of chronic disease worldwide to obesity-related problems including diabetes, cardiovascular diseases, cancer and, some say, female infertility. According to the CIA World Factbook, based on data from 2016, the UAE’s prevalence of adult obesity rate of 31.70% ranks it 20th in the world. Oman, at number 39, has the lowest percentage rate of obese adults of GCC countries, at 27%. With almost 40% of adults in the obese category, Kuwait leads the Middle East in the prevalence of adult obesity, ranking just above the US, which is in 12th place, at 36.20%. Israel has a prevalence of adult obesity of 26.10%, at number 45, while Iran has the lowest percentage of obese people in the Middle East, at 25.80%, ranking 47 in the world.

The next day, Sisi took to the streets on a bicycle and sweat pants, but nutrition experts say it takes more than seeing a president riding a bike to change bad eating habits.

Egyptian President Abdel Fattah al-Sisi on his bike (Photo: AP)
“The key word here is transition. The faster the transition is, the bigger the problem,” says Ben-Gurion University of the Negev’s Shai. “We catch this problem all over the world. The ‘white man’ has had time to adjust to (the prevalence of) junk food, which is why they are more immune to it,” she says. The second key word, according to Shai, is education. In a country like Israel, which is made up of different cultural communities, educational programs must be culturally-sensitive, she adds. Experts warn that if governments do not take things in hand, countries will be facing an increasing health-care cost crisis.

In Israel, one attempt to better educate the public about healthy eating is the food labeling regulation, about to go into effect in January 2021.

Based on a Chilean initiative, the new regulation requires all prepackaged foods in Israel to be clearly labeled, with illustrations in red to inform consumers of food with a high content of saturated fats, salt or sugar.

Food shoppers in an Israeli supermarket (Photo: Archive)
“This is a first for the industry. The food industry (in Israel) is working hard now not to be red-labeled. Awareness by the population of public health costs could be very effective if we educate people to look for (those labels) and learn what is good and what is bad,” she says. The World Obesity Federation has also begun to tackle obesity in the region with a new patient network in the Gulf and Lebanon designed to raise awareness of the causes of obesity and how to make healthier lifestyle choices.

In recent years, Saudi Arabia and the UAE have introduced a number of programs to promote better health, including the Saudi “Quality of Life Program 2020,” which aims to encourage community participation in sports and physical activities, and introduce taxation on sugary drinks.

The UAE has created health awareness campaigns, early intervention programs for children and adults, and the introduction of a sugar tax. Other policies being debated include a full ban on the marketing of unhealthy foods.

“The government has been very supportive in improving the overall healthcare of all residents in the country,” Ladha said.

Differing with the CIA World Factbook over statistics, the UAE Health Ministry says results from a five-year national health survey, which polled 10,000 residents and was released in March, shows improvements in the country’s overall health.