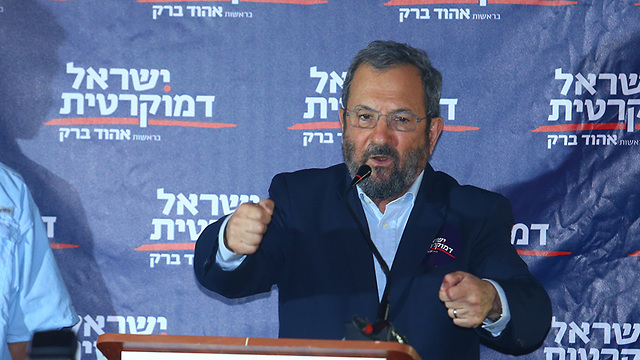 'I am a feminist,' says former PM at election campaign launch, adding that he is severing all business links to accused child sex trafficker; he also brands Netanyahu's son 'an inciting, prostitute-user who lives a parasitic life', highlighting PM's ties to Natan Eshel, 'a convicted sex offender'

Former prime minister Ehud Barak launched his latest election campaign Wednesday evening, repeating his denial that he had anything to do with accused pedophile Jeffrey Epstein's alleged actions.

"I am a feminist. The deeds attributed to Epstein are heinous and I had nothing to do with them," said Barak at the Tel Aviv event for his new Israel Democratic Party. "I've ordered Epstein removed from my businesses, and I plan to file a slander lawsuit against the newspaper behind this plot against me."

The British newspaper the Daily Mail published three-year-old images of Barak earlier Wednesday, showing him entering the New York home of the accused child sex trafficker and appeared to link him to the disgraced financier's "parties" with young girls.

"I thought it (Epstein's earlier conviction in 2008) was a one-time slip, and once it happened again I announced that I am disengaging from him entirely," said Barak.

The former prime minister's dealings with Epstein came under scrutiny in the Israeli media after an investigative report last year revealed that in 2004, Barak received more than $2 million for what was described as research from the Wexner Foundation, to which Epstein was connected.

The foundation later stated it is committed to the promotion of excellence and leadership in Israel’s public sectors, and has also recently released a statement clarifying that all ties with Epstein were severed over a decade ago and that the foundation views his suspected behavior as abhorrent.

Barak also listed the alleged sexual crimes of members of Prime Minister Benjamin Netanyahu's political allies, but also singled out his son, Yair Netanyahu, who was recorded a year ago while visiting a strip club with his security guard and driver in tow, accompanied by his friends.

"The fact that under Netanyahu's reign an inciting, prostitute-user receives protection, lives a parasitic lifestyle and gets tight Shin Bet security… That's a disgrace," Barak said referring to the prime minister's son.

"The fact that a convicted sex offender who was removed from public office for life continues to be Netanyahu's closest associate and the man who helps him establish governments — that's a disgrace," Barak said, referring to Natan Eshel, who was convicted in a disciplinary court and banned from civil life for taking so-called "upskirt" pictures of women in the Prime Minister's Office.

"The fact that under Netanyahu serves a minster accused of covering for pedophiles and remains one of his closest associates — that's a disgrace," Barak said, referring to Deputy Health Minister Yaakov Litzman, suspected of using his position and authority to sabotage the extradition to Australia of a Jewish teacher suspected of pedophilia.

"Ehud Barak's lies won't help him get away from answering the Israeli public's questions," said a statement from the Likud Party following the Barak campaign launch.

"What did he do in the home of his partner and friend, the convicted pedophile, Jeffrey Epstein, and why did he receive $2.3 million from his foundation for research that never existed?"