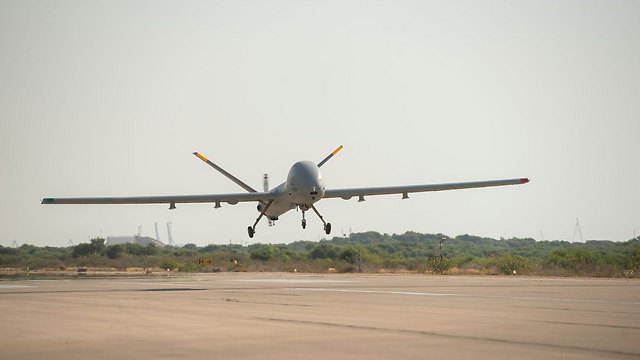 Drone technology supplied by Israel to the Russian military is now being used by its enemies.

According to a report published Wednesday on the Intercept website, Israeli Defense Forces found their own technology used in a Syrian drone they shot down after it had intruded into Israeli airspace in August.

Israeli UAV in the service of the IDF (Photo: IDF)

The report goes on to say the drone was of the design sold to the Russians in 2010.

Russia needed to acquire drone technology after a military conflict with the Georgian Republic in which they had managed to shoot down Georgian drones made by Israel.

Enraged that Israeli technology was sold to their adversary and neighbor, Russia, which was planning to supply Syrian President Bashar Assad's forces with S-300 missile defense batteries, struck a deal with Jerusalem whereby Israeli drones and drone technology would be sold to Russia in exchange for Moscow postponing the supply of the S-300 to Israeli's enemy.

The Israeli drone, which was renamed "Forpost" by Russia, meant an income of $400 million to Israel's defense industry.

In two separate incidents, the Forpost, which is used by Russia in the Syrian civil war to provide the regime and its allies with intelligence, infiltrated across the border into Israel.

The first incident was in 2016 when the UAV that had infiltrated Israeli's territory returned to Syria unharmed and the second time, last summer in which it was shot down by a Patriot missile.

Debree from drone shot down after crossing the border from Syria (Photo: AFP)

The report claims the drones were never transferred to the Syrian military or to their ally, the Lebanon based terror group Hezbollah, though intelligence gathered by them was made available to them.

The Intercept notes that the presence of these drones in the area exemplifies the complexities of Israeli and Russian relation in Syria.

The IDF has been conducting ongoing operations in what Jerusalem calls an effort to block Iran and Hezbollah entrenchment on the Syrian Golan Heights posing a direct threat to Israel's security.

Israeli air strikes in against Iranian targets in Syria

These operations, require and receive coordination with the Russian military command in the area, to avoid unwanted friction and possible conflict between the respective forces.

Hezbollah has demonstrated in recent years, its use of Iranian made drones but the deployment of Israeli technology by Russian forces in the Syrian arena can result in Israel's enemies improving their capabilities further.