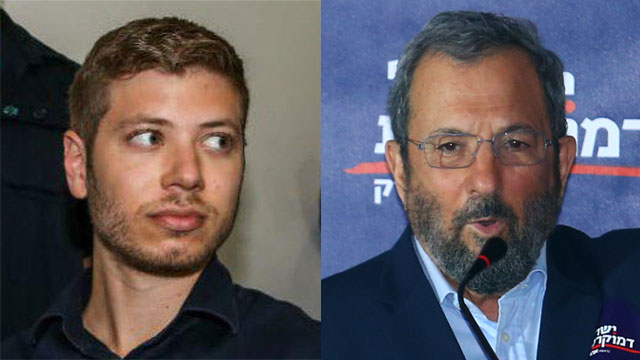 In the lurid battle over political scandals, Israelis are the real losers

Opinion: What does Ehud Barak propose we do about Gaza? What do any of Netanyahu's challengers think? We don't know, because all we hear is a slanging match over which politician (or scion) is most corrupt, most disgraceful - and we have to break this self-defeating cycle

The slanging match currently underway between Israel's political leaders has dragged everyone, north and south, right and left, into a difficult dilemma.

Yair Netanyahu is the prince of this nastiness, lashing out at anyone who dares to sing from a different hymn sheet to his father. And he deserves to get it right back in spades.

After all, he is the embodiment of the saying "people in glass houses should not throw stones." He's opening his mouth? The kid who spent time in strip clubs? Really?

Ehud Barak called him a "zealot" who received "public protection, a parasitic life and the tight security of the Shin Bet security service." Barak's cronies went even lower in a series of digs aimed at young Netanyahu on Twitter.

This does not make Barak the winning side. After all, he enters this fight with his own sword of Damocles hanging over his head.

It is still unclear whether there is a trace of criminal activity in the $ 2.3 million he received from the Wexner Foundation or in his connections with Jeffrey Epstein.

But just as with regard to Netanyahu's various machinations, the public discourse does not stick to the rules of evidence.

Corruption is not only criminal, it is also public, and in these battles there are no victors, only casualties. And the first of them is not Barak or Netanyahu or even his son. The Israeli people are the victims.

Because we are being distanced, all of us, from serious discussions of the really burning issues. This is not about any scandals that Netanyahu and his son have been embroiled in, and perhaps, who knows, Barak too.

In the past few days, the tone of the battle has escalated. It has become more brutal and more aggressive. And it is no longer confined to the borders of Israel.

The world press has become involved. The photos published by the British newspaper Daily Mail prove nothing about Barak beyond a polite visit to Epstein's house in New York three years ago.

But who needs proof when there are pictures? And it is indeed quite embarrassing. But that's precisely the story, because the Mail is a tabloid specializing in scandal and gossip. And for its staff this is just another story for its hungry readers.

The problem is that this is our story, because our election campaign is becoming more and more lurid.

As far as the short-lived storm is concerned – it will pass. But it is impossible to avoid the sparring between political leaders.

The more serious problem is that this scandal-driven slanging match could completely dominate the election campaign.

Barak, who waded in bare-knuckled in order to oust the Likud leader, could become Netanyahu's greatest asset.

For scandals over sex and money, be they about the Netanyahu family or Barak, are the best formula for eliminating the public debate that we desperately need.

What does Barak propose regarding Gaza? We have not been informed. It's not that Barak has nothing to say; he does.

What do any of our political leaders propose to do about Gaza? (Photo: AFP)

But the moment he started dipping his toe into the murky waters of scandal, it all got drowned out, both for him and for the Blue and White party and for all the others who are challenging the current regime.

No, there is no need for purity. The personal conduct of politicians has always been and always will be part of the story.

But the fetid swamp we have slipped into is a dangerous one. We have to get out of it, and as soon as possible.