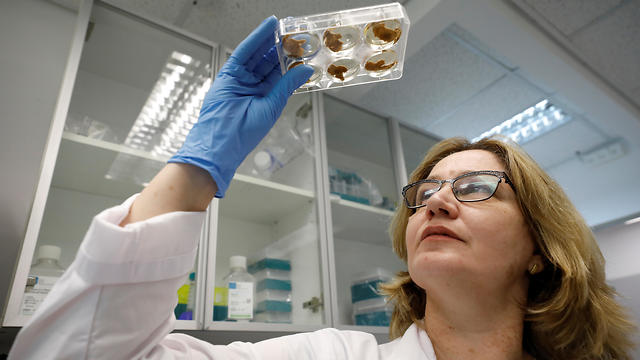 Aleph Farms is set to become the first company to have developed steak from a few cow cells, avoiding the animal's slaughter; the company hopes to compete with the world’s top meat producers within 20 years

Diners in some upmarket restaurants will soon be able to tuck into laboratory-grown steak, thanks to an Israeli startup that seeks to tap into consumer concerns about health, the environment and animal welfare.

While lab-grown hamburgers and chicken are already in development around the world, Israel’s Aleph Farms claims to be the first company to have developed steak in a laboratory and is in talks with some high-end restaurants in the United States, Europe and Asia to have it on the market in 2021.

It plans initially to offer minute steak developed from a small number of cells taken from a cow, avoiding the need to slaughter the animal in the process or use antibiotics which can be harmful to meat eaters.

Aleph Farms hopes to have its product on a limited number of restaurant menus from 2021 in a trial phase, aiming for an official launch in 2023, first in restaurants and then in stores.

Its next product will be a thick steak with “the properties that we like and we all know,” said Neta Lavon, vice president for research and development.

The logo of Aleph Farms, an Israeli company producing lab-grown steak from cow cells, is seen at their office in Rehovot

A serving of its minute steak - a thin slice of meat that cooks very fast - currently costs around $50 but Aleph Farms says it hopes to bring that down by 2021 to only a slight premium to current prices of steak offered in restaurants.

Eventually it aims for mass production, bringing the price down further and making its steaks viable for sale in lower-priced steak houses.

Didier Toubia, co-founder and CEO of Aleph Farms, said the company has ambitions to be one of the world’s top three meat producers within 20 years, challenging market leaders like Tyson Foods, which has invested in another Israeli start-up developing cultured meat, Future Meat Technologies.

Toubia, however, did not give a revenue target for its product.

He set up the company in 2017 in partnership with Technion - the Israel Institute of Technology and foodmaker Strauss Group’s incubator The Kitchen. In May it raised $12 million from investors including Cargill (CARG.UL), and has now raised $14 million to date.

Demand for traditional meat substitutes is growing and analysts estimate the U.S. plant-based meat market, for example, could be worth $100 billion by 2035.

The number of start-ups producing laboratory-developed meat has risen from four at the end of 2016 to more than two dozen by last year, according to market researcher the Good Food Institute.

Dutch start-up Mosa Meat projects the cost of producing a hamburger will be about 9 euros ($10) once production scales up.