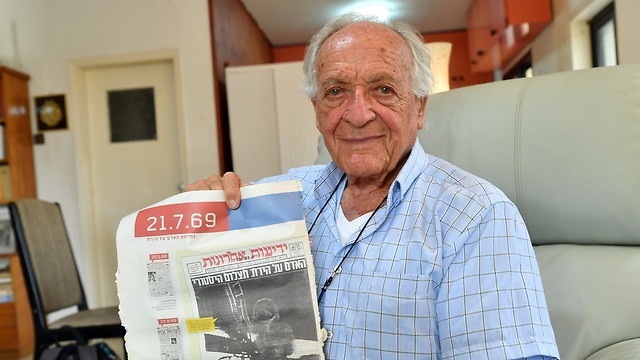 The Israeli who worked on the moon landing

Prof. Yehuda Kedar, today aged 93, was the only Israeli in the control room when Apollo 11 made its world-changing descent on July 20, 1969, and attributes his success to his time in the Palmach

Among the fine minds filling the NASA control room in Houston on July 20, 1969 was an Israeli geologist, who helped to guide Neil Armstrong as he took his giant leap for mankind.

"I was only there for that unforgettable moment because I was in the Palmach," claims Prof. Yehuda Kedar, now aged 93, who was the only Israeli to take part in the historic Apollo 11 landing on the moon.

Kedar, who is a geologist and remote sensing expert, was born in Hungary and moved to Israel with his parents in 1935, when he was just 10 years old. He joined the Palmach – the pre-state army - in his youth and became a scout.

"My job was to prepare intelligence files on Arab villages, and I was aided by aerial photographs taken by the British Air Force that were obtained by my brother, who worked for the Electric Company," he says.

"After the establishment of the State of Israel too, I used the knowledge I acquired during those years to assist with studies on the history of settlement in the Negev. And this gave me the reputation of being a remote sensing specialist, which was what NASA was looking for."

After the establishment of the State of Israel in 1948, Kedar studied geography and became an expert on desert agriculture.

"In 1966, I was a visiting professor at the University of California, studying the ancient settlement of the Indian tribes. I received two letters that day - the first suggested that I stay longer at the university, and the second suggested that I move to Houston, to join NASA," he says.

"It was an offer I could not refuse, and of course I said yes."

Yehuda Kedar with the Apoloo 11 spacecraft

During the Apollo 11 mission, Kedar was one of Neil Armstrong's guides for filming Earth from space.

Although the astronauts only spent two and a half hours outside the spacecraft as part of the scientific research they carried out, they took quite a few detailed pictures of the Earth for Kedar's team.

"I even asked Armstrong to take a picture of Israel from space for me," Kedar says.

"There was real concern for the safety of the crew throughout the mission. It was not a given that they would land on the moon or return to Earth safely, and it was on people's minds the entire time," he says.

"When Armstrong announced that 'the eagle has landed,' we all stood up and applauded. It was a tremendous relief and greatly exciting."

In NASA's archives, Kedar is listed as being responsible for the first archaeological discovery from space: the identification of irrigation channels created by the Hohokam tribe in Arizona, a find made using black-and-white and infrared images taken from Apollo 11.

The NASA control room during the moon landing (Photo: AP)
After leaving NASA, Kedar returned to his academic career, becoming a UN adviser on desertification. For the past 20 years he has served as president of the Institute for Advanced Studies in Arad, where he lives.

Since the 1980s, he has also been promoting peace between Israelis and Palestinians. His message is simple: "If we landed on the moon, we can solve this conflict as well, we just have to be creative enough."