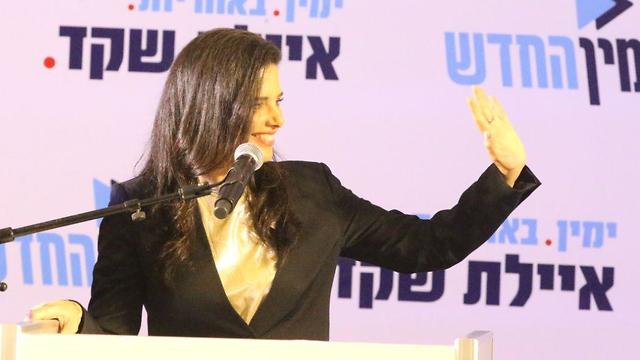 Political reality will soon take the bloom off Shaked's return

Analysis: The former justice minister and her New Right partner really belong in the Likud, but are forced to stay away because of the hatred of the Netanyahus; their attempts at unity with the nationalist-ultra-Orthodox crowd and its rabbis wasn't successful, nor was their solo attempt at Likud 2.0, and this is not likely to change

Political party launches are always festive events - crowded with invitees who roar in honor of "the next prime minister" and seem to believe every word they say.

But even they know that what lies around the corner is a scramble to actually pass the threshold to actually enter the Knesset and not a grand procession to the Prime Minister's Office. Launches are easy; elections are difficult.

On Sunday, Ayelet Shaked and Naftali Bennett gathered their supporters together and joyously announced that their New Right party is back, and this time it will be headed by Shaked alone.

Shaked, which means almond, is a fitting name for a campaign with a short-lived bloom, just like the nut's bright pink almond blossom. Behind the scenes, there is already cautious discussion of a union of the religious bloc to the right of the Likud Party. But several of the rabbis won't have a woman as their leader, while others won't have a secular person. Some simply want the leadership for themselves; they might agree to unite under Shaked for show, but no more.

Prime Minister Benjamin Netanyahu also has an agenda on this issue; he and his wife are not fond of Shaked - and worse, they know that some of her votes are bound to come from the Likud itself. Netanyahu is fighting for his territory, and territory isn't something you compromise on. On the eve of the April elections, Shaked and Bennett left the Jewish Home party to start the New Right. Surveys showed that the public saw them as highly suitable for ministerial office, and the two embarked on an independent path only to realize that despite their personal popularity, the product they were selling was obsolete. The New Right didn't pass the threshold to enter the Knesset.

Ayelet Shaked and Naftali Bennett (Photo: Alex Kolomoisky)
The story of Bennett and Shaked encompasses the story of the entire right-wing. Their natural home is the Likud Party: that's where they both started their political careers, and that's to where they aspire to return. The Likud's broad and vague ideological tent can cope with their philosphy. But one thing prevents their return: the Netanyahus. Late Jewish Home MK Uri Orbach offered the two a way out of the Likud trap: joining him in the National Religious Party, and transforming it to a vibrant, young, settlement-oriented, lightly religious party. The Jewish Home. It worked — at least in the run for the 19th Knesset —and the party got 12 seats. But the brand has been in decline ever since.

Bennett and Shaked weren't pushed out of the Jewish Home. They chose to leave, when they felt like their newly found home was sectorial and ruled by rabbis, and that it wasn't the launch pad they were hoping for. All their attempts to approach a young, secular or traditional crowd were shunned by the nationalist and ultra-Orthodox branch of the party.

The right thing to do would have been to wait until Netanyahu was forced to step down, or until his weakness grew enough to allow them to open the gates. But their optimism and eagerness led them to establish a party and refuse to understand they were in a tight spot.

The old right, Netanyahu and the Likud, is well established. Its voters don't want a new right. And many religious voters are only interested in a sectoral party to protect their interests, and voted for the Union of Right-Wing Parties instead.

Sara and Benjamin Netanyahu (Photo: GPO)
And there's one more problem. In the White House sits a president who's in favor of the settlement agenda, making it hard on people on the far-right to offer an attractive political agenda. The struggle for the territories was replaced by struggles over religious affairs, and that's what the current elections are about. However, neither Shaked nor Bennett have anything to offer in that regard. When Shaked and Bennett left from the Jewish Home, it quickly morphed; the nationalist-ultra-Orthodox bloc took over the party, and they are not going to cede power easily. The result is mutual threats, as both sides say they'll run on alone and accuse the other side of jeopardizing the bloc with a loss of votes if it doesn't pass the threshold. (There is a similar story on the left side of the political map, by the way.) The attempt to establish a Likud 2.0, with a tiny kippa and cool videos on social media, wasn't successful. The earlier attempt to combine Likud refugees with nationalist-ultra-Orthodox rabbis wasn't successful either, and is not likely to be successful this time around.