Chelsea Clinton at her 2010 wedding to her Jewish husband Marc Mezvinsky
Photo: AP 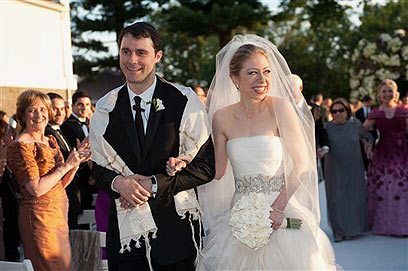 Israeli Jews must not alienate their non-Orthodox American brethren

Opinion: No matter how many times it has been said before, it certainly bears repeating - Israeli Jews have to embrace our American counterparts; we have to hold them tightly, for to exclude them because of who they marry is ultimately self-defeating

Certainly, one could express shock and denounce such a harsh statement, attack Peretz for his insensitivity and to waggle the finger of political correctness at him.

Chelsea Clinton at her 2010 wedding to her Jewish husband Marc Mezvinsky (Photo: AP)

There is definitely grounds for all of these responses, although it's doubtful just how effective they would be.

Perhaps, however, it is possible to react differently for once, and refrain from being caught in a Pavlovian response with the usual condemnations of desecrating the memory of the Holocaust.

The minister's outrageous use of such a sacred event does offer the opportunity to pay a little more in-depth attention to one of the cardinal problems facing the Jewish people in recent decades.

Like it or not, love it or not, it's a fact: Jews living in the United States are more and more marrying partners outside the tribe.

Underestimating their decision to do so is not a successful strategy to bring them back into the fold, and Peretz's words not only fail to help the situation, they also increase the rift between Israel and the Jewish brethren abroad.

Without going into the exact data that is published every few years about the shifts being experienced by American Jewry, it is very clear that there is a massive gulf between Israeli Orthodoxy and the values of Diaspora Jews.

The liberal streams of Judaism in the U.S. have already accepted that the Jewish people are undergoing great change. But instead of insulting and belittling the congregations, the liberal spiritual leaders are trying to embrace these changes in an effort to halt the exodus from the Jewish faith.

Yet at exactly the same time, the hardline Orthodox leadership has harsh words for those who dare to break away.

This attitude is, of course, of little use. Historic change cannot be met with verbal aggression and a dearth of solutions.

No matter how many times it has been said before, it certainly bears repeating - Israeli Jews have to embrace our American counterparts. We have to hold them tightly, and very closely.

And if our brethren do go through a process that we or the Israeli rabbinical establishment do not like, it does not mean that we can trivialize that process or disrespect it.

These days, when everyone is happy to hurl insults, but no one seems to have any solutions, the way to communicate with our Americans brethren is to open channels of dialogue and communication, not by slamming the door in their faces through either deeds or words.

Blaming them for a new Holocaust is the simplest and least intelligent solution. Opening the door and saying, "Come in, we accept you as you are" is so much harder.

It is harder because the Israeli Orthodox establishment, which has an iron grip on its monopoly of Israeli Judaism, will not allow anyone else a seat at the table, is unwilling to listen and refuses to engage in dialogue.

If the way we seek to show our concern for the Jewish people is by insulting our fellow Jews and their way of life and by accusing them of creating a second Holocaust, perhaps we should look in the mirror and rethink our own Judaism - the Israeli one.

Because to push millions of people from the ranks of the Jewish faith simply because they are not prepared to live according to the dusty diktats of those who have a monopoly over Israeli Jewish life may not be a Holocaust, but it is definitely a genocide.