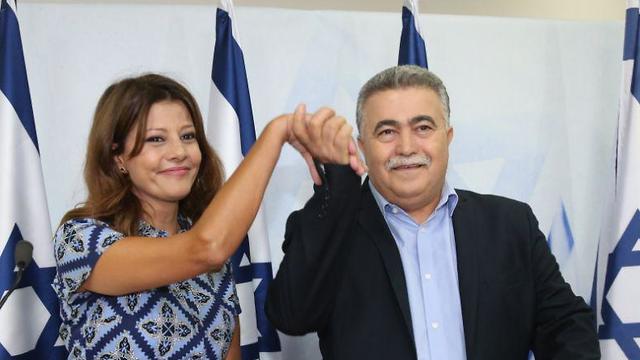 Opinion: Barak and Peretz should behave like responsible adults in the days before Knesset lists must be submitted for the September elections; the former has to accept that he is no longer the leader of the left and the latter must understand that he will not draw voters away the religious or the right

When fellow journalists talk to me about Ehud Barak and Amir Peretz these days, they refer to them as "your friends."   Indeed, I supported them when they deserved support — and they did deserve it.

Amir Peretz and Orly Levy-Abekasis announce a new political partnership (Photo: Motti Kimchi)
I was introduced to Peretz when he was a teen from Sderot, an ideologist and an idealist. When he spoke from the periphery and in the name of the periphery of the country, he spoke in protest of the plentiful support that West Bank settlers enjoyed. When Peretz spoke of the deprived, he differentiated them from the privileged settlers. But Peretz has become exhausted in recent years and would probably be happy to rest in the president's residence — a sanatorium for exhausted politicians. Over the years, he became an expert in practical politics, and should have known that Orly Levy-Abekasis and her Gesher Party wouldn't win him new supporters. She is barely able to bring her own Knesset seat with her.

Peretz has put his trust in a survey that shows that 80 percent of the supporters of Moshe Kahlon's Kulanu Party, an offshoot of Likuyd that recently returned to the fold, are opposed to Netanyahu. He fantasizes that these disaffected voters will vote Labor-Gesher, as if there was a shortage of rightist parties. There is also the easy choice for these voters, which is not voting at all, and many are expected to do just that.

Ehud Barak at the launch of his new Israel Democractic Party (Photo: Orel Cohen)
Peretz may end up having to apologize to his predecessors Labor chairman, Avi Gabbay and Isaac Herzog, for the damage that this decision may have done to the party.

As an experienced politician, he should now work behind the scenes to get the party's ruling body to reject the union with Gesher and offer to take on Levy-Abekasis but not her list of candidates, and then quickly join forces with Meretz.

After that, he should see what he can offer Ehud Barak's Israel Democratic Party.

Barak is a different story - a tragicomedy. He is one of the two most prominent figures in recent Israeli political history, the other being Benjamin Netanyahu. Both are intelligent, knowledgeable, with acute senses and sharp rhetoric.

So how come the latter is celebrating his position as the longest-serving Israeli prime minister, while the other barely managed just one term two decades ago?

Netanyahu is focused and has linear thinking. He knows that the shortest distance is between two points.

Barak, on the other hand, is convinced there are endless distances between the same two points. He's certain he can maneuver whatever political forces are out there and bend them to fit his vision of  victory.

Bnejmain Netanyahu and Ehud Barak as political partners in 2012 (Photo: EPA)
Barak's game plan relied on Nitzan Horowitz's win as the new Meretz chair, Itzik Shmuli taking over from Gabbay in the Labor Party, and then a quick union with the two with Tzipi Livni thrown in for good measure — and himself as leader of this grand bargain as the icing on the cake. He then planned to tackle the too-polite Benny Gantz and his soporific Blue and White party, and when the polls started reflecting the shrinking gap between the two, he would take over as leader there too.  This is where I remind the public that Barak led a 90-year-old party to just 13 seats, while Gantz led a 90-day-old party to 35 seats. Peretz has to wake up from the illusion that he has a magic ability to draw hundreds or even thousands of Shas and Likud voters from their fortresses and bring them over to a party they historically detest — the Labor Party. It's simply not going to happen.

Meretz Chair Nitzan Horowitz (Photo: Motti Kimchi)
And as for Barak, it would have been responsible of him to simply keep his followers as an online support group for other leftist parties.

For now, it seems Netanyahu is doomed, and not by the hand of the left, but rather by devout right-winger Avigdor Liberman.

But what will become of the Israeli left? It has to force Peretz and Barak into tactical discipline to thrive.

In the week that is left before Knesset lists are closed, everyone on the left must behave like adults and quickly unite into one list. Nitzan Horowitz, who's hardly an adult but is responsible, would be happy to help make this a reality. If the left does end up running three different lists, the results could be dangerous and Meretz, Labor and the Israel Democratic Party could all fall short of the threshold needed to enter the Knesset.