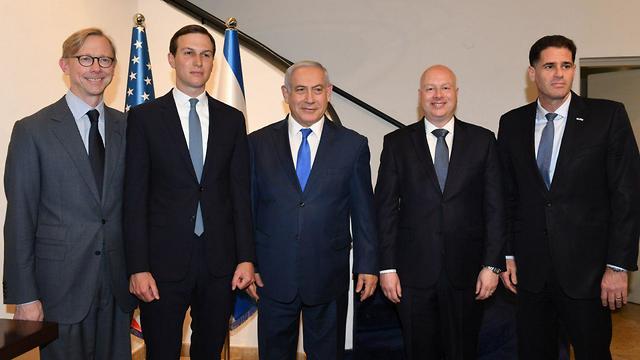 Is Kushner's latest Mideast trip a waste of time?

Israeli and Palestinian analysts say Trump team on regional peace trying to keep momentum going in wake of lackluster Bahrain conference, while it is clear that the 'deal of the century' is struggling to come to fruition

US President Donald Trump’s Mideast team is headed to the region next week for another visit to promote the administration’s controversial plan for peace between Israel and the Palestinians. The team will be led by President Trump’s senior adviser and son-in-law, Jared Kushner, and include lead negotiator Jason Greenblatt as well as Brian Hook, the White House’s point man on Iranian affairs.

“The visit will build on the understandings of the Bahrain economic workshop, and start the process of finalizing the plan," says a White House official who asked not to be named as he was not authorized to speak on the matter.

But it appears the plan has not resonated at all with the Palestinian side. Based upon numerous interviews, the Americans have been unable to alter the perception of pro-Israel bias too great to be considered “honest brokers.”

Kushner and his team will be touching down in Israel, Egypt, Jordan, Saudi Arabia, the United Arab Emirates and Qatar. The trip will come around a month after a U.S.-led economic conference in Manama, Bahrain, that promised the Palestinians and other Arab states $50 billion in investments, loans and mega-financial projects. Kushner, the plan’s main engineer, is looking to garner support for his proposal with the visit. Hani Abu Aker, a political analyst who contributes to numerous regional journals, tells The Media Line from Gaza City that the Bahrain workshop failed to yield the results Kushner was hoping for, and the upcoming visit could be an attempt to keep whatever momentum the presidential adviser thinks he has going. “I believe the purpose of Kushner’s visit is to continue contact with Israel and other key regional governments regarding the economic plan, and to discuss ways to collect money for it,” Aker says, adding that the U.S. administration is desperate to show that its plan is succeeding and has gained international acceptance. “Kushner will work to raise more money from the Gulf states, which will show that they are committed to his vision,” he says.

Jared Kushner speaks at the opening of the Bahrain workshop, June 25, 2019 (Photo: Reuters)
The Palestinians boycotted the Bahrain conference and harshly criticized President Trump’s approach to the conflict, saying that achieving a final resolution to the conflict must first come through addressing the political track. Fatah leader Rafaat Elyan says that the US administration had no credibility and was “incapable” of conducting any mediations between the Israelis and Palestinians. “The American administration,” Elyan says, “is trying to please (Prime Minister) Benjamin Netanyahu and give him what he wants at any price.” Israeli defense and government analyst Amir Oren says that the White House was in a bind and trying to show that the plan was headed in the right direction.

“Nothing is expected to come out of this mission, as (with) all others in this futile effort,” Oren says. ‘The only purpose is to show motion – even if without movement – and score political points with Donald Trump’s Evangelical base.”

At the end of 2017, Trump took a major, yet controversial, step of recognizing Jerusalem as Israel’s capital, later moving the American embassy to the city. These steps were welcomed by Netanyahu and conmdened by Palestinian Authority President Mahmoud Abbas.

With the Palestinians now choosing not to communicate with Washington, and Israel busy with a repeat parliamentary election in September, there is growing speculation among pundits that the so-called U.S. "deal of the century" might not see the light of day.

Article written by Mohammad Al-Kassim. Reprinted with permission from The Media Line