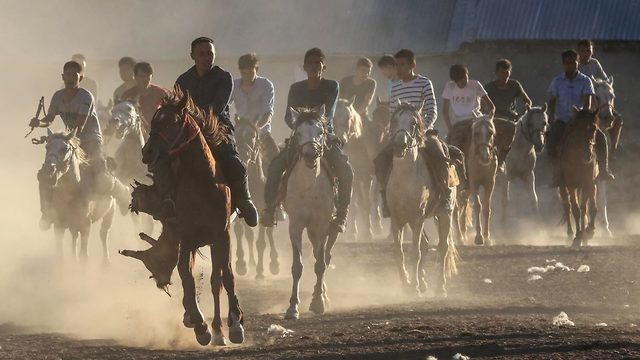 Soccer is still king, but sports like falconry, oil wrestling, camel racing and – yes – dead-goat polo maintain a link with cultural history even though they are unlikely to become a sensation in other parts of the world

Soccer is the most dominant sport in the Middle East today. But there are others, and in order to play them, some items you might need include olive oil, a live goat, a domestic falcon or the most beautiful camel in all the desert.

In fact, sports like oil wrestling, Buzkashi, falconry and camel racing and pageantry are traditional contests that preserve revered bits of history and culture from pockets around the region.

A mounted Kyrgyz Turk carries a dead goat as he’s pursued by others during a game of Buzkashi in Van, Turkey on June 26, 2019

This year, Turkey hosted its 658th oil-wresting festival in Edirne Province. The sport is so old that it stretches back to the Ottoman Empire, which was founded in 1299. To play the game, wrestlers are paired up and their bodies covered in olive oil. The only piece of clothing they wear is the Kispet, or tight, knee-length leather pants.

In order for a player to win, he must either put the other on his back, hold him upside down from his feet, carry the entire body three steps without the opponent’s foot touching the ground, rip off the Kispet or exhaust the challenger until he gives up.

The sport originated in ancient Greece but is today beloved by Turks, who have proudly upheld the tradition since the modern republic’s birth in 1923. According to Islamic studies expert Birgit Krawietz of the Free University of Berlin, it is called the “sport of ancestors.” Those who participated in the fights years ago most often did so in villages, as it was considered the “people’s sport.” Over time, matches moved into palaces and then became integrated into routine military training.

A lesser-known sport in Turkey is Kok-Boru, or Buzkashi, as it is called in places like Kazakhstan, Kyrgyzstan and Afghanistan, where it is the national sport. The game might be compared to a rougher and earlier version of today’s aristocratic polo.

Men ride on horseback through a field competing to take possession of the carcass of a headless goat, which is slaughtered before the start of the match.

Depending on the country, the game can be played as either a team or individual sport, and instead of trying to get a ball into a goal, participants try to swing the goat into the goal.

It is a very physically demanding game – and has few rules. The goat is typically roasted in an oven with potatoes as a reward for hungry athletes following the match.

Falconry, also widely popular in the Middle East, especially in the Gulf, is commonly thought to have originated in the region. However, according to experts from Wild Flight, a falconry company in the United Arab Emirates, the sport was born 4,500 years ago in central Asia and moved to the Middle East only 2,000 years later.

Originally, falconers used the birds to hunt for food to feed their families.

Men would set out to capture falcons for four to five months during the seasonal winter migration and then train them to catch prey during the second wave of bird migration.

Falconers always made it a point to leave their birds with enough to eat for themselves. At the end of the season, the falcons would be released back into the wild. Today, in Middle Eastern cities like Dubai, hunting is prohibited. Falconry has morphed from a way of feeding families into a sport, and falcons are now domesticated and purchased from dealers who have government-issued permits.

Falconers train their birds to fly from the arm of one team member on one side of a field to the other side, where a second team member is standing with fake prey.

The falcons, once released, use their hunting instincts to fly across and capture the prize. The falcon that does so in the shortest amount of time takes home the gold.

Ruan Botha, managing director of Wild Flight, says that even after 24 years of participating in the sport, he learns something new every day when working with the falcons, adding that he loves the sport because of the way players connect with the birds. “It’s something you need to experience,” Botha says. “Remember – this is a wild animal that you train and at the end of the day it can fly away. But it comes back because of the bonding it has with the handler.”

One of the most popular and perhaps most internationally recognized sports coming out of the United Arab Emirates, Bahrain and Jordan is camel racing, which has a long and controversial history.

Camels are not often thought of as fast-moving animals, but they can reach up to 40 mph, as compared to horses, for example, which can reach speeds of 55 mph. Originally, those who participated in the sport used local camels. Today, there is big money in camel breeding, as cash prizes worth millions of dollars are offered to owners whose camels make it to the finish line fastest. There are also camel beauty contests.

Just last year, a dozen camels were disqualified from a pageant in Saudi Arabia due to the fact that their lips and noses were found to have been injected with illegal facial filler to improve their physical appearance.

The looks of camels are judged based on the coat, neck, head – including pouty lips, dark lashes and long ears – and a robust hump.

Camel racing has come under scrutiny after it came to light that owners were trafficking young boys from Oman, Sudan, Pakistan and other locations in North Africa and South Asia to use as jockeys.

In 2005, UNICEF and the UAE signed an agreement to return these and other trafficked children to their families.

In the last decade, camel racing has come into the technology age – now, instead of human jockeys, owners mount their animals with small, remote-controlled robots.

Attached to the robot is a whip to control the camel, with the whip flying at the push of a button.

Prof. Danyel Reiche, who focuses on the politics of sports at the American University of Beirut, says Middle Eastern countries have not been able to globalize their native sports in the way that China has with table tennis, or Japan with Judo. Much of this has to do with access to equipment.

“Sports such as camel racing and falconry have remained local. The most popular sport in Middle Eastern countries is soccer, (and) that (spread) from the UK starting (in) the late 19th century,” Reiche says. According to James Dorsey, a senior fellow at the S. Rajaratnam School of International Studies (RSIS) in Singapore, who focuses on the Middle East and North Africa, these traditional and lesser-known sports can also play a role in strengthening national identity. “All of these sports have historic roots, but part of the reason there’s an emphasis on them is… (to) promote heritage as part of an effort to create a national identity,” Dorsey says. “If you’re playing with a goat,” he says, “that’s not really something that is going to catch on globally.”