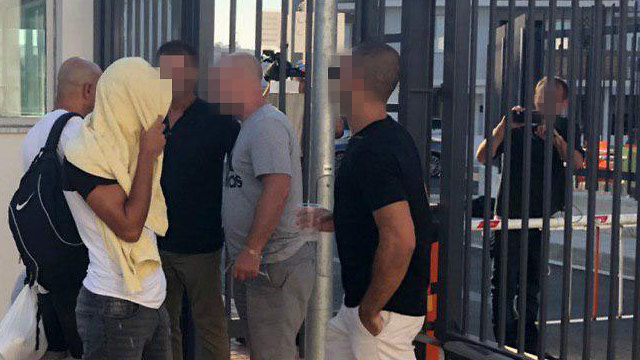 'I don’t know what they did, or if they did anything. I know nothing,' says one of the teens who were released about the others who remain detained; 'this is the first sign of the cracks in the complainant's version' says teens' attorney, while Cyprus police considers complainant's testimony reliable

Five Israeli teens who were suspected of gang-raping a British woman in a Cyprus holiday resort were released Thursday from detention while seven others remain jailed. The teens were released after DNA results ruled them out and in light of a lack of other evidence to back the rape victim's case.

Five suspects get released
One suspect said after his release that he doesn’t know if the rest of the detainees are guilty: "I don’t know what they did, if they did anything. I know nothing," he said. The teen thanked his friends in Israel for supporting him: "I appreciate all of them, they did a lot for me, " he said.

One of the teens after his release
"This is the first sign of the cracks in the complainant's version," said attorney Nir Yaslovitz who represents some of the teens. "The police accepted their version of events and they will soon come home," said Yaniv Havery, an attorney representing some of the detained suspects. One of the teens' parents said his family is happy the truth came out: "We knew all along that our son didn’t do anything. We hope to quickly bring him home and put this behind us."

One of the suspects with the Cyprus Police (Photo: Reuters)
The British teen is still in Cyprus and gave another testimony on Tuesday. The Cyprus police considers her version reliable, despite attempts to disqualify her version of events by different factors. The three key suspects in the gang-rape were questioned on Tuesday and claimed they only watched their friend have sex with the victim and did not participate. They are also suspected of a conspiracy to commit a crime.