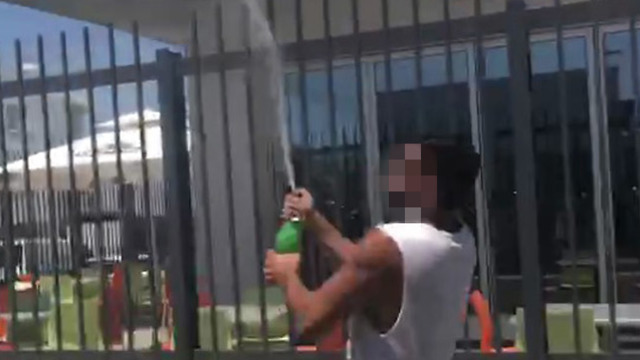 - The families of seven Israeli teens suspected of raping a British tourist were waiting for them with champagne and dancing as they were released from custody in Cyprus on Sunday, after a dramatic turnaround in the case that saw them freed and their accuser arrested.

"I feel great, the truth has come out and I am happy," said one of the former suspects as he was released. Five of the 12 were freed on Friday and the remaining seven were released Sunday.

The 19-year-old British tourist said on July 17 she had been gang raped by the 12 Israelis at a hotel in the Cypriot resort town of Ayia Napa. She was arrested early Sunday and police will Monday seek to extend her remand.

According to suspicions, the young woman was angry that the sexual encounter at the center of the investigation had been recorded and therefore fabricated a complaint that she had been raped.

The former suspects are reunited with their families in Cyprus

The teenager who was the main suspect in the investigation said upon his release: "We knew it, we knew it, that God would pay her back. You have to be careful, think twice, not do stupid things and get girls to sign a contract before you do anything."

He said that his accuser knew that she was being recorded during the encounter.

"You will get the full story in Israel," he said.

The seven are expected to land back in Israel early Sunday evening.

The boys' parents received notification of their imminent release on Sunday morning. The seven, who had been held in various detention facilities throughout Cyprus, were taken back to Ayia Napa for their simultaneous release. Their parents and other relatives were also taken to the detention center to meet them.

Relatives of the Israeli teens in Cyprus to greet them

At the entrance to the facility, several of the parents said that they would wait to comment until they were back in Israel.

"First of all, we will take our children by the hand, bring them home (and) when we arrive in Israel, we will have a lot to say - and we will say it," one of the parents said.

"It has been proven that from start to finish, everything we said - that the children were innocent and that everything was consensual - was true," said the father of one of the teens who was arrested, as he arrived at the Ayia Napa detention center to greet his son.

The rape investigation was still ongoing on Saturday, as the local police expanded their search after finding three DNA samples at the scene that did not belong to any of the suspects.

The head of the investigation team, Sergeant Marius Cristo, arrived Saturday at the hotel where the alleged incident occurred.

He asked the hotel management to provide a list of all the tourists who had been staying in the hotel on the day before the incident.