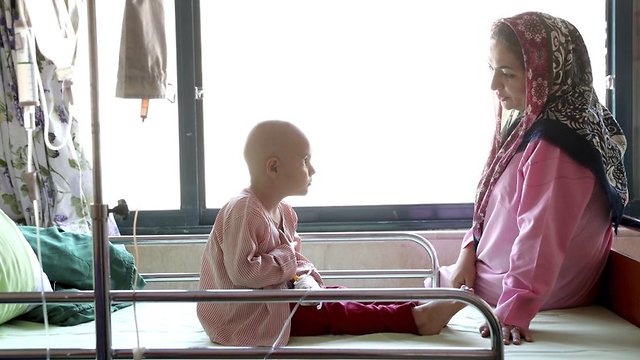 With Iran’s economy in free fall after the American pullout from the nuclear deal and escalated sanctions on Tehran, prices of imported medicines have soared as the national currency tumbled about 70% against the dollar; as Iran’s health system struggles to keep up, many blame Trump’s 'maximum pressure' campaign for the staggering prices and shortages

Taha Shakouri keeps finding remote corners to play in at a Tehran children’s charity hospital, unaware that his doctors are running out of chemo medicine needed to treat the eight-year-old boy’s liver cancer.

With Iran’s economy in free fall after the U.S. pullout from the nuclear deal and escalated sanctions on Tehran, prices of imported medicines have soared as the national currency tumbled about 70% against the dollar. Even medicines manufactured in Iran are tougher to come by for ordinary Iranians, their cost out of reach for many in a country where the average monthly salary is equivalent to about $450.

Iran’s health system can’t keep up and many are blaming President Donald Trump’s “maximum pressure” campaign for the staggering prices and shortages. The sanctions have hurt ordinary Iranians, sending prices for everything from staples and consumer goods to housing skyward, while raising the specter of war with the U.S.

Taha’s mother, Laya Taghizadeh, says the hospital provides her son’s medication for free — a single treatment would otherwise cost $1,380 at a private hospital. She adds the family is deeply grateful to the doctors and the hospital staff.

“We couldn’t make it without their support,” says the 30-year-old woman. “My husband is a simple grocery store worker and this is a very costly disease.”

The Iranian rial has plunged from 32,000 to $1 at the time of the 2015 nuclear deal between Tehran and world powers to around 120,000 rials to the dollar these days, highly affecting prices of imported medicines. The nuclear deal had raised expectations of a better life for many Iranians, free of the chokehold of international sanctions.

The landmark accord lifted international sanctions in exchange for curbs on Iran’s nuclear program, but now the deal has all but unraveled and new and tougher U.S. sanctions are in place.

While the United States insists that medicines and humanitarian goods are exempt from sanctions, restrictions on trade have made many banks and companies across the world hesitant to do business with Iran, fearing punitive measures from Washington. The country is cut off from the international banking system.

Last week, Health Minister Saeed Namaki said budget cuts because of the drop in crude exports have dramatically affected his department. The U.S. sanctions have targeted all classes of Iranians, he added.

“The American claims that medicine and medical equipment are not subject to sanctions is a big and obvious lie,” Namaki said.

“Our biggest concern is that channels to the outside world are closed,” said Dr. Arasb Ahmadian, head of the Mahak Children’s Hospital, which is run through charity donations and supports some 32,000 under-16 children across Iran.

The banking sanctions have blocked transactions, preventing donations from abroad, he said. Transfers of money simply fail, including those approved by the U.S. Treasury.

“Indeed, we are losing hope,” said Ahmadian. “Medicines should be purchasable, funding should be available and lines of credit should be clearly defined in the banking system.”

Official reports say Iran produces some 95% of the basic medicines it needs and even exports some of the production to neighboring countries.

But when it comes to more sophisticated medication and medicines for costly and rare illnesses and medical equipment, Iran depends heavily on imports. And though the state provides health care for all, many treatments needed for complicated cases are simply not available. Many prefer to go to private hospitals if they can and avoid long waiting lists at state ones.

Hamid Reza Mohammadi, 53, spends much of his free time going in search of drugs for his wife and daughter, both of whom suffer from muscular dystrophy.

“Two, three months ago I could easily get the prescription filled in any pharmacy,” Mohammadi said, reflecting how quickly things have deteriorated.

Pharmacist Peyman Keyvanfar says many Iranians, their purchasing power slashed, cannot afford imported medicines and are looking for domestically manufactured substitutes. “There has been a very sharp increase in the prices of medicines, sometimes up to three to four times for some,” he said.

Those who still have some cash often turn to the black market.

Mahmoud Alizadeh, a 23-year-old student, rushed to the shady Nasser-Khosrow Street in southern Tehran when he got word his mother’s multiple sclerosis drug was available there.

“She is just 45 years old, it’s too soon to see her so badly paralyzed,” he said.

He pays three times more for the drug on the street than he did in May 2018. “I don’t know on whom Trump imposed sanctions except that he is punishing terminally ill people here.”

Many travel from rural areas to bigger cities in search of drugs for their loved ones.

Hosseingholi Barati, a 48-year-old father of three, came to Tehran from the town of Gonbad Kavus, about 550 kilometers (350 miles) to the northeast, looking for medication for his leukemia-stricken wife. He says he has spent $7,700 so far on her illness.

“It’s a huge strain,” he said. “I have sold everything I owned and borrowed money from family and friends.”