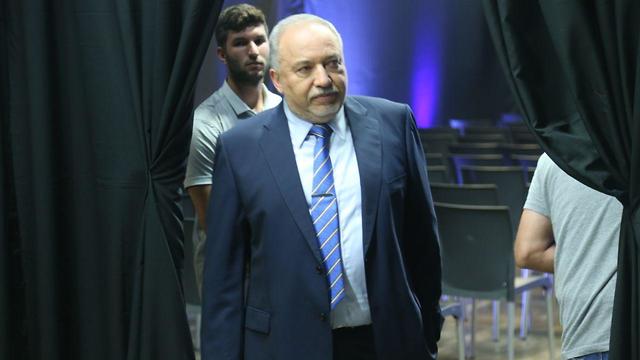 Avigdor Liberman presented his list of Knesset candidates to a packed hall Tuesday repeating his demands from the new government when it is formed and mocking Prime Minister Benjamin Netanyahu for remembering the immigrant communities from the Russian speaking countries just 60 days before the election.

Liberman reiterated his party will recommend the leader of the largest party to be tasked with building a coalition, to the president.

Liberman mentioned the ministry of Interior held by the Shas party leader Aryeh Deri which is deemed crucial to preventing the closure of businesses on the Shabat, a point of concern for the predominantly non-religious and often non-Jewish immigrant communities.

The secind is the ministry of health, which Liberman says has been taking care of sectorial groups (alluding to the ultra-Orthodox community) ahead of the general public.

His candidate for minister will be Dr. Leonid Eidelman, former head of the Israel Medical Association and an immigrant himself, who will be a professional minister rather than a member of Knesset.

Liberman's declared his objective is keeping ultra-Orthodox parties out of the next coalition which he thinks should be a unity government of both Likud and Blue and White.

Before the April ballot, Liberman was tethering around the minimum threshold and seen as the leader of a sectorial party, but since his refusal to enter into Netanyahu's coalition, polling shows he has almost tripled his support and is seen by the public as a representative of the general public, especially those opposing religious legislations

While this event was taking place, just a few kilometers away, Prime Minister Benjamin Netanyahu held a gathering of his own with Russian speaking immigrants.

Prime Minister Benjamin Netanyahu at an event for Russian speaking immigrants
Netanyahu's main message to the crowd was that Liberman has turned left and away from the immigrants he proports to represent, he said, and will back Blue and White leader Benny Gantz as the next prime minister.

Netanyahu promised he will see to the needs of the Russian-speaking community by keeping the ministry of Imigration and Integration in the hands of Likud.

The prime minister has been trying to attract Russian speaking voters away from Liberman since the latter announced he will not join the prime minister's coalition after the April 2019 elections.

He enlisted the help of former Liberman crony Robert Ilatov, who was dropped by Liberman from the party's list before the April elections, to help him get his message out to the community.

The Blue and White party also met with Russian speaking voters Tuesday promising they will form a cabinet with no extortion and no extremism.