Netanyahu as Thanos from the Avengers
Photo: Matan Cohen 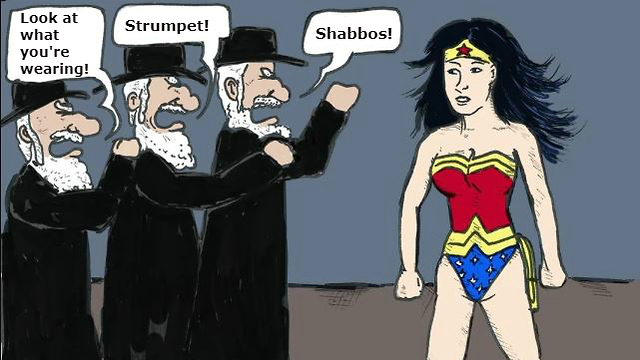 Have you ever wondered how world-famous comic book characters would cope with Israeli reality? Well, comic book artist Matan Cohen puts the world's most famous superheroes - from Batman to Wonder Woman - into tricky situations in his latest exhibition

Batman can't find an apartment, Wonder Woman is showing too much flesh, and Spider-Man doesn't work on Shabbat.

A new comic exhibition at the Animix Festival toys with the idea that life for superheroes in  the Holy Land is no picnic.

So how would superheroes cope with the reality of life in Israel?

Apparently, they would struggle, at least according to comic artist Matan Cohen.

Cohen's new comic exhibit deals with the rigors of Israeli life in a humorous, entertaining and controversial way.

Batman looking for a place to live in Israel

There's even a small dig at Prime Minister Benjamin Netanyahu's legal woes and the culture clashes between secular and religious Israelis.

Netanyahu as Thanos from the Avengers

The exhibit is part of Animix Tel Aviv, an animation, comics and cartoon festival currently being held for the 19th time at the city's Cinematheque.

Batmobile stuck in a traffic jam in Israel

In addition to the exhibit, Cohen, who has already produced nine comic books and worked as an illustrator over the past 15 years, will give a lecture at the festival about his unique profession, the difficulties he encounters and the reactions he gets.

The festival runs until August 3 at Tel Aviv Cinemateque