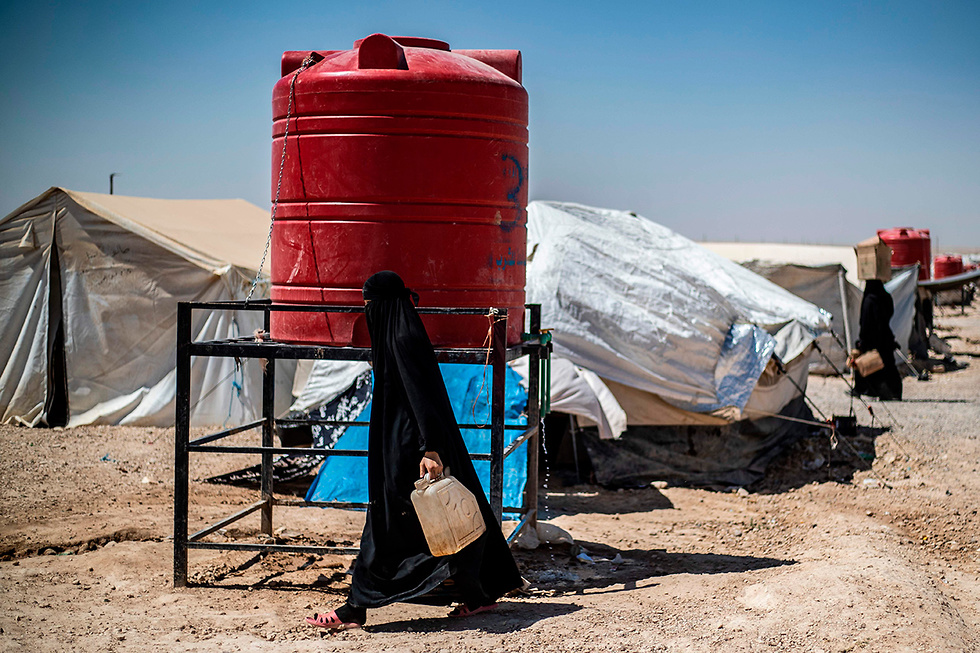 In jammed Syrian refugee camp, the women of ISIS are a persistent and real threat

The extremist wives of Islamic State fighters are attacking guards and aid workers in the Al-Hol camp, where 70,000 people are packed in, and the Kurdish authorities have repeatedly warned that the children of extremists represent a 'time bomb' the world urgently needs to defuse

Stabbing guards, stoning aid workers and flying the Islamic State’s black flag in plain sight: the wives and children of the ‘caliphate’ are sticking by the extremists in a desperate Syrian camp.

Months after the defeat of the extremists proto-state, families of ISIS fighters are among 70,000 people crammed into the Kurdish-run Al-Hol camp in northeastern Syria.

Swarming around an AFP journalist, women clad-in-black complain of poor medical assistance, a lack of aid, and boiling tents.

They also praise the elusive ISIS supremo Abu Bakr Al-Baghdadi, saying they are waiting for orders from their leader.

“Two or three times, the Asayesh were stabbed,” said the 23-year-old Iraqi mother of three.

The so-called “MuHajjirat,” female extremists who traveled to Syria to join ISIS, are behind the stabbings, she said.

“Why do they stab them? Because they allow injustice to prevail,” said Umm Suhaib, covered in black from head-to-toe.

She also accused the Asayesh of conducting “night raids” on the tents of “sisters,” referring to female IS supporters.

In March, the SDF announced the defeat of the ‘caliphate’ — which ISIS declared in 2014 over parts of Syria and Iraq in 2014 — after it expelled the last extremist fighters from the village.

Tens of thousands of people, mostly women and children, were trucked to Kurdish-run camps in northeast Syria during the weeks-long campaign.

“We only came to the camp because of Baghdadi’s orders,” said Umm Suhaib.

She has not seen her family in Iraq for nearly three years but she does not seem keen on going back home.

Her only wish is the “return of the ‘caliphate’” so that she can “settle there.”

Surveillance cameras that operate round-the-clock are omnipresent in Al-Hol and security is especially tight around a fenced section of the sprawling camp, where foreign women are held guarded by Kurdish forces.

Unlike Syrian and Iraqi women who are allowed to roam the camp freely, these high-risk prisoners are escorted by armed guards when they want to go to the camp’s market or receive aid rations.

“They see us as enemies, and that creates problems,” said Amer Ali, the head of the Asayesh force, adding that some women have tried to flee.

In June, a woman from Al-Roj camp who had been transfered to hospital tried to escape from there but was arrested before she could flee, medical sources at the facility said.

The woman, they said, had removed her black face veil and changed into a white dress to make her getaway.

Earlier this month, a video shared on social media networks showed women clamouring around an ISIS flag that had been hoisted on an electricity pole in Al-Hol as children chanted “Allahu Akbar” (God is Greatest).

Daesh wants “to spread its ideology through these women,” said Ali, confirming the authenticity of the footage.

The children too are a problem, he said.

“They throw stones at us because their mothers tell them that we killed their fathers, and destroyed their houses,” Ali said.

Kurdish authorities have repeatedly warned that the children of extremists represent a “time bomb” the world urgently needs to defuse.

Without rehabilitation and reintegration, these children could become future “terrorists,” they have warned.

“We do not have the means to stop everything that is happening, but we try to contain these incidents,” he said.

ISIS supporters “remain attached to their ideology, and they will always represent a danger,” he warned.

One of them is Umm Abdelaziz, a 20-year-old Syrian from Damascus.

She is furious because she has had no news about her husband who was arrested a few month ago after leaving Baghouz.

“For us, death is more valuable than this humiliating life,” she said.

In Baghouz “we were prosperous, we had money, but here were burn in the flames of hell.”