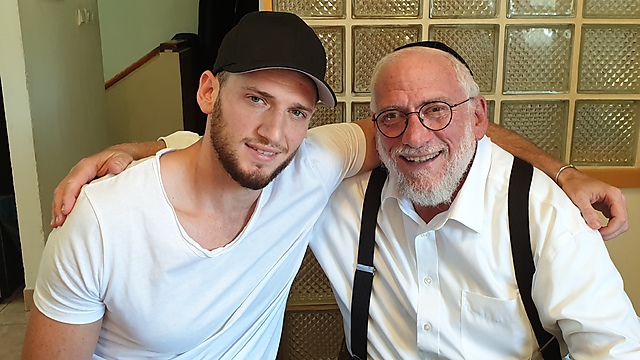 A bond stronger than tradition

Rabbi Motti Kornfeld understands how it feels when a Haredi family has a child who leaves the ultra-Orthodox way of life, for it happened to one of his own children; but the rabbi is adamant that no child of his will be ostracized and is on a mission to help other families in the same situation reunite

For Rabbi Motti Kornfeld, the Haredi tradition of cutting oneself off from children who are no longer religious is unconscionable.

"To parents whose child wants to leave the religion I say one simple thing: It is strictly forbidden to throw a child out of the house. Period," says the rabbi, who has spent the last five years working for the "Shahar" project, which integrates ultra-Orthodox soldiers into the Israeli army.

Perhaps even more importantly, Rabbi Kornfeld sees himself on a special mission to help deal with the phenomenon known as "dropping out" of ultra-Orthodox life - the departure of Haredi young people from the sector and sometimes the religious world in general, a phenomenon often accompanied by alienation from families.

"This is a growing phenomenon, to our great regret, but one we have to deal with," he says.

The rabbi understands this pain first hand. He has 11 children, one of whom – 26-year-old Daniel  - decided about a decade ago to leave the ultra-Orthodox world.

Recently, the two unveiled a special song they wrote and composed together, which deals with the phenomenon of exiting the Haredi life.

And that's not self-evident in a society in which even a slight deviation from the norm can have severe consequences.

"We responded to the path he has chosen with understanding, love, support and a little trepidation," says Rabbi Kornfeld.

"On the one hand we are very, very happy that he chose to seek out his own truth, which is very important. On the other hand, because it was different from what we wanted at first, it was not easy and smooth at first. Nonetheless, there was support and love at every step of the way. We had no other choice."

The rabbi does not himself adhere to mainstream rabbinic trends, although he is an integral part of Haredi society. As such, he teaches Torah lessons to soldiers in the Haredi battalion of the Givati and Paratrooper brigades, and is also the activity coordinator for English-speaking lone soldiers and new immigrants who join the IDF.

There are rabbis and parents who have cut themselves off from sons and daughters who have gone in a different direction.

"There are very, very well-known rabbis in the ultra-Orthodox community who live by the (Exodus) verse, ' for there was not a house where there was not one dead,' and that just summarizes the phenomenon. Parents, unfortunately, are throwing their children out of the house for various reasons, mainly because of their influence on the other children," says the rabbi.

"Within my work at the Shachar organization, especially when an ultra-Orthodox boy decides to enlist, it's often the parents who ostracize the child completely and throw him out. One of the things we are trying to do is reconnect ultra-Orthodox soldiers and their parents, and I am happy to say that we have had quite a bit of success. After a long process, they embrace the children again."

With a smile, Daniel prefers to define himself as "a good Jew trying to do the best he can. That's all."

And what happens if your son decides to abandon your path?

"If my child decides he wants to go a different direction in his life," Daniel says, "then from my experience I will try to accept it as best I can."

The Kornfelds are a musical family. In 2001, they released a CD called "Fathers and Sons," featuring 10 Hasidic songs that are sung and played by Rabbi Motti and his sons Judah, Samuel, Shlomo and Daniel. And over the past two years, Daniel himself has begun writing and composing songs.

"When I go to my parents, I sit on the balcony with the guitar," Daniel says.

"One day my dad came out and said, 'I have a tune stuck in my head. Let's try to get it out with the guitar and maybe combine the English and Hebrew together.' It was really born on my parents' balcony, at night, with a guitar, quietly."

The song entitled "One" includes the lyrics:

It's me, your son

Who is lost and is looking for you

My heart wants to feel you

Give me your hand, don't leave me alone

Because you and I are one

Rabbi Kornfeld admits that some in his immediate environment have been less than tolerant in their response to Daniel's decision to leave the Haredi world.

"I went to the synagogue one day, and a very affable Jew with a smile came up to me and said, 'How come you have a fallen son?' I looked at him and said, 'I don't know what you are talking about.'

"He said, Come on, me and you, we know each other and everything, we eat cholent together.' I told him with the utmost seriousness: 'Listen, I want to send you a message, you understand - we have no fallen son. There is no such thing.'