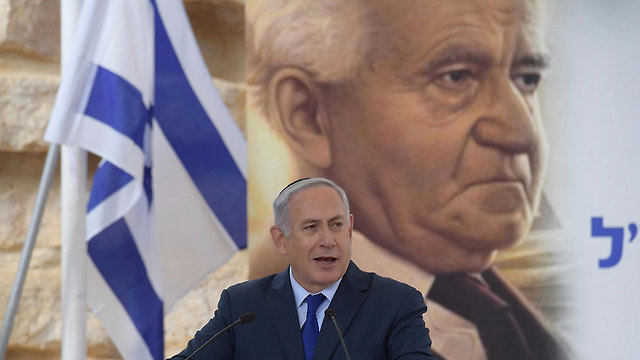 What Netanyahu can learn from Ben-Gurion

The current prime minister's stint in power may have surpassed that of Israel's first PM, but as his paranoia about threats to his power runs ram pant it seems like he has a thing or two to pick up from his predecessor, especially about when to step down

Not long ago, celebrations took place at Prime Minister Benjamin Netanyahu's residence after he made history by breaking David Ben-Gurion's record as the longest-serving Israeli prime minister.

There were many accolades bestowed upon Netanyahu – and with good reasons; he is an excellent prime minister, who succeeded in bringing economic and political prosperity and relative security to Israel. But the great also have weaknesses and, absurdly enough, the longer his tenure continues, the more his biggest weakness - his paranoia - grows.

On Sunday, the suspicion in the air rose to a whole new level, when the prime minister's crony MK David Bitan called on Likud members to declare that Netanyahu and Netanyahu alone would be the party candidate for premier.

The runners went out urgently to make sure there were no rebels in the realm. A Knesset member or minister who did not immediately respond to the WhatsApp message was labeled a dangerous insurgent, and one by one the Likud officials hastened to sign the pledge of loyalty to Netanyahu.

They are no longer committed to a path or an ideal or even the party; they are committed to their one and only leader. They must not express any substantive criticism, they must not insist that under no circumstances should Israel be dragged into a third round of elections this year. They can only genuflect before their leader – whose personal wellbeing is above the good of the state.

Anyone who dares to think differently or mutter in secret will face harsh punishment. Prince Yair Netanyahu will find a way to settle scores with them on Twitter or even face to face. First, it was Gideon Sa'ar who faced false allegations, then Yuli Edelstein with bizarre coup accusations. Paranoia runs rampant.

How can one run a political party and a country with so much suspicion in the air? Shouldn't it be the exact opposite – shouldn't time and experience in power actually lower the level of anxiety and insecurity?

Netanyahu's longevity has already surpassed that of Ben-Gurion, but it seems like he also has a thing or two to learn from the first country's prime minister.

Ben-Gurion once wrote (as quoted by historian Michael Bar-Zohar): "You must trust your people – more often than not, more than they trust themselves, since a true political leader instinctively recognizes a person's ability and realizes it to its full potential in times of crisis."

One cannot truly lead without trusting oneself and one's inner circle. It is possible to tyrannize people with threats and intimidation, but not lead. And a country lead by paranoia is a country that careens down the tracks like a train with no engine.

Unfortunately, not only does Netanyahu not trust his fellow Likud members, he is making sure to make them into yes-men, for God forbid someone should start showing some independence or expressing criticism.

Isn't there a single person who could stand up and make clear that if he had to choose between a third round of elections or replacing Netanyahu, he would take the option that is best for Israel?

No one is indispensible; even a great prime minister like Netanyahu has a replacement. But Netanyahu has imprinted in both his own and his admirers' minds the notion that Bibi is the state and the state is Bibi.

A responsible leader knows that one of their most important jobs is to prepare their successors, the ones who can bear the burden of running a country. A veteran leader like Netanyahu should not be extinguishing sparks of future leadership - quite the opposite.

If he cares for the future of this country, it is incumbent upon Netanyahu to grow and foster the next generation of leaders. A responsible leader also knows when to hang up his hat and not drag the entire country into another election cycle after failing to form a government. If Netanyahu fails again to form a government, he must retire from politics and go home to Caesarea.

And no. I would not have Netanyahu sent on a mission to bring life to the Negev, like Ben-Gurion did after retiring, but I would definitely suggest he read these words by Israel's first leader: "A statesman for whom government is not a goal but a means of serving his people, must examine the circumstances, conditions and needs of his time and place, as well as his fitness, virtues and dispositions, when he comes to determine whether he should continue being at the helm, or temporarily or completely depart."