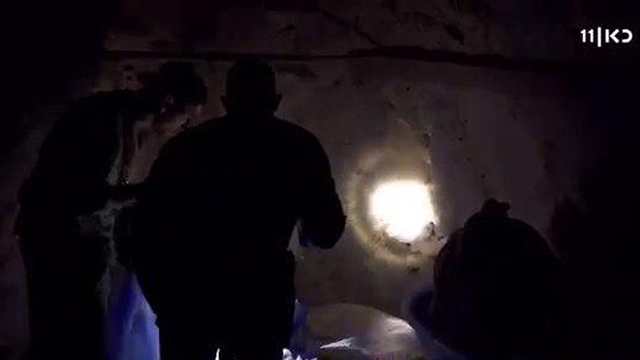 Homeowner learns of so-called weapon catch after neighbors recognized his home when the series about the Jerusalem Police Force was aired; Israel Police apologizes for incident, says an investigation is in order

The Israel Police apologized Tuesday for planting a rifle in the East Jerusalem home of a Palestinian family during the filming of a docudrama show about the Jerusalem Police Force, and then documenting its discovery. The ordeal was revealed by Haaretz newspaper on Tuesday, after the ninth episode of the series Jerusalem District aired on Kan 11 Channel and showed an M-16 being revealed in a Palestinian home.

In the course of the series production, in November 2018, the home of Samer Sleiman in the village of Isawiyah was searched; he later received a document saying nothing was found and forgot about the event.

However, when the docudrama series aired, Sleiman's neighbors recognized his home in a scene showing a weapon search culminating in the discovery of an M-16 in the home's cellar.

The police force described the cellar as “a tunnel no lesser than the ones found in Gaza,” and expressed its joy about the catch, while the homeowner himself was never arrested or questioned about the so-called find. Now, Sleiman is worried that his neighbors will see him as a criminal or a police collaborator.

The weapon seach scene in the docudrama (Photo: Kan, the Israeli Public Broadcasting Corporation)
"I'm nervous, I'm afraid people will think I'm a collaborator. The series shows my home, my staircase, everyone here knows their neighbors. I still haven't received threats but I'm afraid it will come to it," says Sleiman.

"People think I'm a drug and weapon trafficker and wonder how come I wasn't arrested despite they allegedly found a weapon in my home," he added. "For a TV show, the police destroyed my name."

The police's statement said it "apologizes for any harm caused to a citizen as a result of the airing of the episode."

"The case is under investigation and lessons will be learned," added the statement.

Kan's CEO Eldad Koblenz said that management is examining how the ordeal came to happen, and that the production company that is behind the docudrama, Koda Communications, will be questioned.

"Obviously we didn’t bring an M-16 with us," said a source from the production company. "We're examining what happened and will take responsibility. In every episode it says some of the events and some of the arrests have been recreated, there's no trouble with that since we blur people's faces and tell a general story."

"The search took place following real intelligence that came in. After the police didn't find weapons, only than the weapon was planted. The production team jumped to the site only after the intelligence came in," he continued.

Ynet learned that the search took place at 3:30 am, when the family's four children were asleep. Sleiman said that the policemen didn't let them continue sleeping in their rooms and asked that all the family sits in the living room while they search.

"The children were afraid, the police dogs were frightening. They asked me, 'what do they want?" says Sleiman, adding that they weren't informed about the search and the filming.

"If the series wouldn't have aired, we wouldn't have known this was staged. They said they were filming to prevent complaints about property theft," Sleiman added.

"Koda Communication makes sure that it's productions are truthful; almost all the events that the series shows are a complete documentation of the work of the Jerusalem Police Force and its policemen, who risk their lives to keep the city's residents safe," said a statement by the production company.

"On rare occasions, in order to keep police methods secretive or to make sure the participants remain safe, illustration footage is combined, in order to show events that the local police encounters during its work (as stated clearly in credits in each relevant episode)," the company continued, adding that faces and place names were blurred to prevent anyone from being identified.

They further added that the event will be investigated and that lessons will be learned.