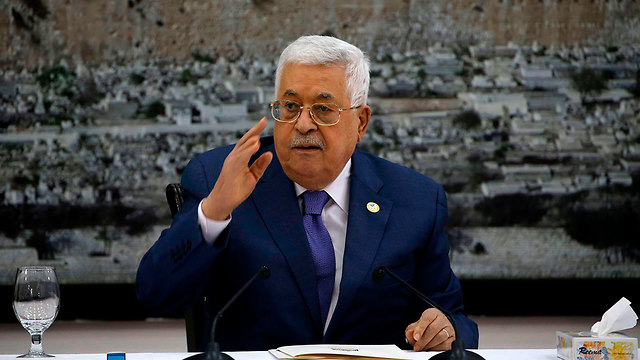 Palestinian leadership split on suspension of agreements with Israel

The first meeting of the committee tasked with cutting ties with Israel at the request of Palestinian President Mahmoud Abbas, saw sharp differences of opinion.

Abbas, 84, has made similar threats before but has not implemented them.

According to a Palestinian source with knowledge of the meeting, Abbas is not eager to sever relations with Israel, at least not yet.

Rather, he wants to wait before any major steps are taken. The source stressed that the Palestinian leadership isn’t unified on the issue.

The source, who spoke on condition of anonymity, said that the meeting saw sporadic shouting matches between participants, as Abbas tried to referee.

In an interview Fatah spokesman Osama Al Qawasmi contended that there is consensus among the Palestinian leadership. “There is no disagreement, but there are serious discussions, and everyone agrees that the next stage must be clear. The Palestinians alone cannot be committed to the agreements while Israel is in breach. The time has come for Israel to shoulder its responsibilities as an occupying force.”

The meeting took place at the PA presidential headquarters in the West Bank city of Ramallah, where 14 top officials, all men, gathered.

According to the source, the meeting, which was chaired by Abbas, was split into two camps. One was led by Abbas who doesn’t want to see a quick implementation of the decision. He was supported in his position by Palestinian Civil Affairs Minister Hussein al-Sheikh, who meets regularly with Israeli officials.

The other camp, headed by secretary general of the Palestine Liberation Organization, Saeb Erakat, advocated for quick and tangible measures to be taken to send a clear message to Israel, and to appease the Palestinian street.

The source said the discussion was intense and differences were so deep that those in attendance couldn’t agree on a final statement.

Naser Tahboub, a former Palestinian official, explained Abbas’ call to halt all agreements with Israel is “easier said than done.

“President Abbas’s announcement was an expression of political anger over the situation, but I do not think it is a decision that is going to be implemented any time soon,” Tahboub said.

He added that implementing the decision will be difficult. “There are consequences that may harm the Palestinian people. I think the leadership will think deep before taking such a step and that’s why we see slow movement on the side of the PA.”

Also present at the meeting was Palestinian Prime Minister Mohammed Shtayyeh, who called for “gradual disengagement” with Israel.

He said that his government needs time to find alternative partners to Israel.

Spokesman Al Qawasmi said the Palestinian leadership had made up its mind to confront ongoing Israeli actions and attacks against Palestinians.

Relations between the PA and the Israeli government have worsened in recent months, reaching a nadir when last month Israeli forces demolished dozens of housing units in a Palestinian-controlled neighborhood near Jerusalem.

Last February, Israel decided to deduct about $10 million a month from tax revenues it collects on behalf of the Palestinians. Israel says the amount is equal to salaries the PA pays to families of prisoners or directly to inmates in Israeli jails.

Israel views these payments as encouraging attacks on Israelis, while Palestinians see them as providing support for families who have often lost their main breadwinner.

The Palestinians have in response refused to take any of the roughly $170-$200 million in monthly tax revenues Israel collects for it, saying it will not do so until Israel agrees to provide the full amount.

Article written by Mohammad Al-Kassim. Reprinted with permission from The Media Line