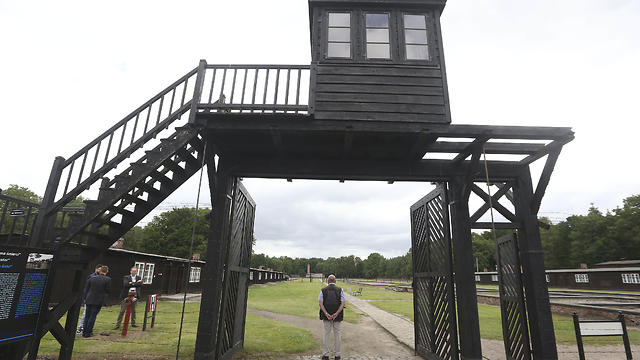 Bruno Dey who guarded the Stutthof death camp - where 65,000 people, including many Jews were killed - as a 17-year-old soldier is accused of preventing prisoners from escaping; 'What use would it have been if I had left, they would have found someone else?' he says

A 92-year old German man will go on trial in October charged with helping to murder 5,230 prisoners, many of them Jewish, at a Nazi death camp in World War Two, prosecutors said on Thursday.

Though he is not accused of any specific killing, Bruno Dey is charged as an accessory to those committed at Stutthof concentration camp near Gdansk - in what is today Poland - from August 1944 to April 1945 when he served as a guard there, because he helped prevent prisoners from escaping, according to the charges filed by Hamburg prosecutors.

"Surveillance was necessary for the concentration camp to function, and the camp was made to kill people," Hamburg state court spokesman Kai Wantzen said of the prosecution's argument.

The suspect has made a partial confession, said a spokeswoman for the Hamburg prosecutors, but gave no further details. Under German rules for court cases, the suspect's full name is not published. Die Welt daily reported he had acknowledged his presence at the camp and said he knew that people were pushed into gas chambers and that he had seen bodies being burned in the crematorium. However, he argued this did not amount to guilt. "What use would it have been if I had left, they would have found someone else?" Die Welt newspaper quoted him as saying. About 65,000 people, including many Jews, political prisoners, homosexuals, Jehovah's Witnesses and Polish civilians and resistance fighters were murdered or died at Stutthof, according to the museum's website. Prosecutors argue that many were shot in the back of the head or gassed with the lethal Zyklon B gas.

March of SS soldiers in Nazi Germany (Photo: Getty Images)
"The prosecutors accuse him, as a cog in the murder machine who was aware of the circumstances, of having been able to contribute to carrying out the orders to kill," said Hamburg prosecutors in April when they charged him. Because he was only 17 or 18 years old at the time of the crimes, he will be tried in a youth court which has different sentencing guidelines. However, if found guilty, he could still face time behind bars. His frail health means court sessions will be limited to around two to three hours per day and so far, sessions have been scheduled through to December. Even though the number of suspects is dwindling due to old age, prosecutors are still trying to bring individuals to justice. A landmark conviction in 2011 opened the way to more prosecutions as it was the first time that working in a camp alone was sufficient grounds for culpability, with no proof of a specific crime. Some 21 Nazi leaders, including Hermann Goering and Rudolf Hess, were put in the dock at an international military tribunal in 1945-1946 known as the Nuremburg trials, but the West German justice system did little to bring further prosecutions.