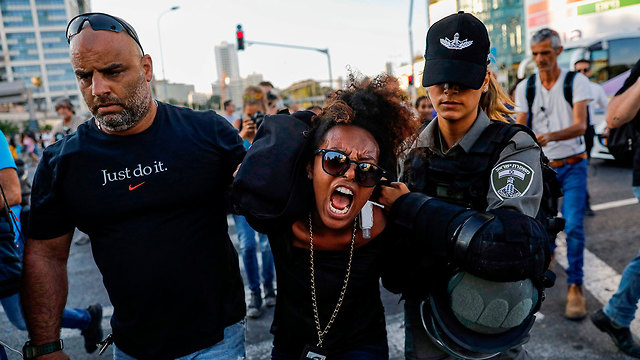 Opinion: The recent wave of demonstrations by the Ethiopian community and the escalation in violence is a sign of growing aggression and polarization across the public discourse; but we need to remember that we are all one people, and hatred will once again lead to our destruction

Many Israelis felt awkard and helpless in the face of the intensity of the Ethiopian community's protests last month. It is painful to see such a precious population feel such great sense of alienation.

The protests raised some familiar questions: Where did we go wrong? Did the Ethiopian community's violence go too far? What else could be done? How should we continue from here?

Police arrest a protester during demonstrations against racism toward the Ethtiopian community (Photo: AFP)

These are important questions indeed, yet, we must not paint the community members as violent: They are a mirror to Israeli society.

The entire Israeli society has become more violent, but we struggle to see it because of our daily life, which holds us captive in the prison of our own consciousness.

Because of that, we must stay away from superficial and dichotomous discourses of oppressed and oppressors, blacks and whites. This is everyone's problem.

People were killed this week on Israeli roads and not as a result of a struggle between oppressed and oppressors or blacks and whites.

People have also taken their own lives this week and not as a result of a struggle between oppressed and oppressors or blacks and whites.

Just this month, a man went out with his family to a mall in Ramle, got into a fight over parking space and was shot dead at point-blank range.

It's not between oppressed and oppressors or blacks and whites.

Does any of us know how many women turned to shelters for domestic abuse victims this week? The violence that we encountered this week within the different political party – is also not between oppressed and oppressors or blacks and whites.

That is why we must stop with this dichotomous division and say once and for all, that the violence is not violence between blacks and whites.

The success of the Ethiopian community's just protests and struggle for equality requires focus.

The police are violent towards all weaker communities, not just the Ethiopian one.

That is why we should handle police violence first and struggle for equality from a position of strength and not of weakness.

We need to ask ourselves "what happened to us?"

The discourse in Israeli society deals more with how things look on the outside rather than facts.

It is a polarized, aggressive discourse, which differentiates between good and evil in a dichotomous manner.

We must not let this kind of discourse take over our wonderful society. Unfortunately, it seems like Israelis are busier making history rather than studying it.

The first murder in history, according to the Bible – Cain killing Abel – is a good example of how a meaningless conflict between brothers can lead to a disaster. What happened there?

The clash between Jacob and God's angel, as told in the Bible, could provide us with an answer to this question, as it teaches us that most wars are caused by small trifles.

This war is verbal, not physical. It is an ideological war, based on dialogue between one another and both sides do God's work.

But as the angel decides to move from a dialogue with Jacob to a physical altercation and injures Jacob's hip, he failed.

Once we move from dialogue to violence - we begin to fail, we all suffer from that. That is why Jacob wins the fight with the angel.

Jacob defeats the angel not through force, but through dialogue.

The destruction of the Second Temple also wasn't caused by struggle between black and whites, but in a reality in which everyone were seemingly of the same culture.

However, there was still hatred between the two sides regardless of education, wealth or knowledge of Torah.

It was hatred that lead to the destruction of the Temple. There is still hatred around the world to this day, including in Israeli society.

Every hatred stems from the other being different than us, whether in ethnicity, language, culture, opinions, beliefs or lifestyle.

All these are just symptoms and not the disease itself. When the Temple was destroyed there were no secular, new immigrants, ultra-Orthodox, Hassidim, liberals, conservatives, settlers or chabadniks.

Everyone was a member of the same community. This is not a war between oppressed and oppressors, black and whites. We must stop trying to make the other side correct itself and demand the same thing from ourselves.

We must stop demanding that others love us and demand more love from ourselves.