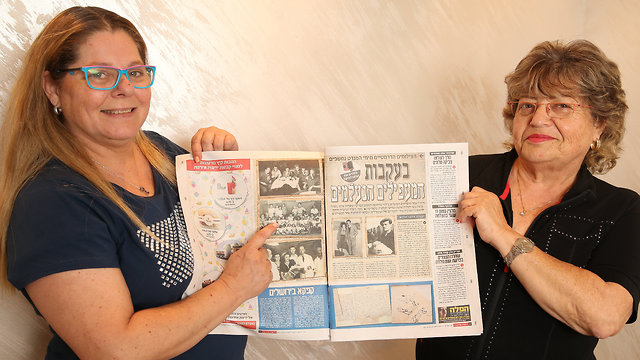 An appeal for people to help name those held by the British for trying to enter pre-state Palestine elicited a wave of responses; Bella Dermer recognized her five-year-old self in the makeshift kindergarten; Shmil Katz was amazed to see his a photo of baby brother's brit, which the family never had; and Anat Yahav can see her son's resemblance to his late grandfather

The publication of photographs from the British internment camps in Cyprus may be bringing some closure to Jewish immigrants interned there.

It took place between 1946 and 1949, when Jews attempting to illegally immigrate to pre-state Palestine were taken by British Mandate forces to internment camps in Cyprus.

Last week, Ynetnews published some pictures of Jews interned in the camps in the hopes that some of that historic documentation will yield family members who recognize and can identify the people in them.

And some in fact did. With much excitement and emotions some of these images photographed long ago, now have names attached.

Bela Dermer, aged 77 from a suburb of Haifa, had shivers down her spine as she picked up her daily paper.

Children at school in British internment camp in Cyprus

There she was in an old photograph taken in the makeshift kindergarten she attended in the camp where she and her parents were held, in Cyprus.

Dermer, a native of Romania, was five years old when the picture was taken.

Today she is the mother of two with four grandchildren and a long career as a special education teacher.

"I told my students about the illegal immigration. They were fascinated," she says.

"I think the young generation today doesn't know enough about the suffering of the illegal immigrants. Since the pictures were published, my friends won't stop calling and the entire family is excited."

She has no recollection of the picture being taken but does remember the kindergarten.

"There were big Hebrew letters on the wall," she says.

"I remember a British man gave me some gum. I was very happy but at home my parents scolded me because we were not supposed to accept anything from the British."

There was much anger towards them, she adds.

Shmuel (Shmil) Katz from Kibbutz Gesher was amazed to see his baby brother being held by his parents Batya and Mordechai in what was his brother's brit mila ceremony. He was the one thousandth baby born in the camps.

"I nearly fainted," Katz says. "I rushed to buy as many newspapers as I could find to keep as many copies as possible."

Shmil's brother sadly passed away in 2006. The family never had a photo of the brit until now.

Brit mila in an internment camp in Cyprus

In that same picture, on the right appears Beinish Pagot, a Holocaust survivor who was not a member of the family but participated in the happy event. He was identified by his grandson, Yaniv.

"Grandad was a survivor of Auschwitz. The only survivor out of nine siblings. He never spoke much, but thanks to this publication, we have an additional piece of the puzzle of a family destroyed by the Nazis."

"When I look at Pupick, I see my son and his grandson Roee, who is the spitting image. We have received greetings from the past.

Pupick's cousin Avram was also in the photograph.

Pupick's family hold up his picture from Cyprus

Nurit Gerson recognized her uncle Volko Naubauer in a photo of him holding a baby.

"He moved to the States years ago, but I hope that through this picture I will be able to find people who knew him and perhaps learn a bit more about his life," she says.