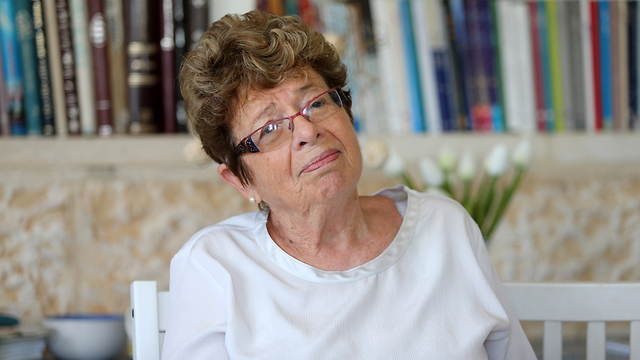 Finding strength after the murder of her grandchild

Esther Schlesinger survived losing her family in the Holocaust, being shot in the head by the Nazis and rescued from a pile of dead bodies, but losing her grandson - 18-year-old Dvir Sorek who was stabbed to death last week in a terror attack - was one of the worst experiences of her life

When the phone in the house of 81-year-old Holocaust survivor Esther Schlesinger rang on Wednesday evening, it was her son, Yoav Sorek, on the line, asking if she was with her grandson, Dvir.

The body of 18-year-old soldier Dvir Sorek was found with multiple stab wounds in the early hours of Thursday on the side of a road near the seminary where he studied as part of a program which combines Torah studies with military service. He was neither armed nor in uniform.

The two Palestinians suspected in Sorek's murder had been arrested overnight Friday after an extensive manhunt.

“Dvir was a responsible boy and I knew that if the head of the yeshiva decided to involve Yoav in the situation, something terrible must have happened,” she said.

“Throughout the night, I was kept updated on the search. After the body was found, Yoav came to my house, I opened the door and my son said to me, 'Mom, Dvir is not with us anymore.'"

Although Schlesinger welcomes the capture of her grandson’s murderers, she reiterated her son’s sentiments that the two suspected killers deserve a death penalty.

"I would have been happy had they been killed rather than captured alive, because unfortunately this arrest is temporary,” she said.

“God forbid one day they will be released … But I don't want to talk about the killers anymore.”

Two weeks before his death, Dvir wrote a loving and heartfelt letter to his grandmother, telling her that he “feels loved,” among other things. “That's exactly him. He knew how to cherish," she said.

This is not the first time tragedy struck the family of the Hungarian-born Schlesinger, who lost her mother and four brothers in the Holocaust. She herself was shot in the head and left seriously wounded while hiding from the Nazis during the war.

"We were hiding in a big building. The Germans figured out that Jews were there and stormed the building, led everyone down the stairs and just started shooting people like in the movies. Some were killed on the spot, others were wounded. I got a bullet in the head," said the 81-year-old.

The Nazis loaded the bodies of the dead and wounded onto a wagon and Esther found herself in the middle of the pile covered in blood and fighting for her life.

“The wagon driver stopped at a local bar and another person whom I had never met before approached the wagon and put his hand inside the pile of bodies, realizing there was someone alive. ‘Don’t die girl, just don't die’ he told me,” said Esther.

“Along with another person, they snuck me into a building that was turned into a makeshift hospital, where they took the bullet out of my head. I remember them yelling 'two millimeters,' which means the bullet was two millimeters from the brain. They saved me."

In 1946 she immigrated to Israel with her father, who survived the Holocaust. Their family lived in the central city of Petah Tikva until about 20 years ago, when they decided to move to Gush Etzion, a cluster of settlements in the West Bank.

Her family was also affected by a wave of terror attacks in the 1990s when Esther's half-brother, Shaya Deutsch, was stabbed to death while working in his greenhouse in Kfar Yam (a small Israeli settlement in the Gaza Strip evacuated in Israel's 2005 disengagement plan) back in 1993.

He was murdered by a Palestinian worker he was laying off for security reasons. “The worker murdered him because he wanted to prove to his family that he didn’t ‘love Jews,’ it was awful," said Esther.

Esther Schlesinger with her family and the late Dvir Sorek (Photo: Courtesy of family)

Despite everything the 81-year-old has been through, Esther believes that losing her teenage grandson was one of the hardest experiences of her life.

"In a world without Dvir in it, we’re all losers.”

Nevertheless, the loss of a beloved grandson did not undermine Esther's love of life. On the contrary, she feels now more than ever she has an important role to play in the life of the family.

"It made me think about how, as a grandmother, I want to make sure the family - Yoav, Racheli and Dvir's brothers - continue to laugh and live, without becoming Dvir's living memorial,” she said.

“My job is to look after them.”