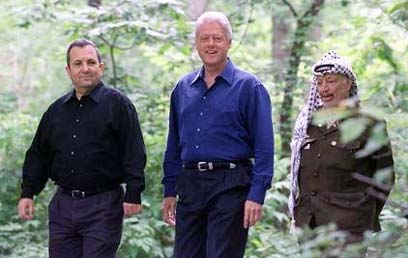 Why Israel must annex parts of the West Bank

Opinion: The time has come to return to the national consensus that has been disregarded for almost 20 years, but this time in a way that will substantively and significantly consolidate Israel's position – namely, sovereignty in the Jordan Valley and settlement blocs

The biggest political upheaval in Israel's positions in the conflict with the Palestinians was not the Oslo Accords, but the Camp David summit of July 2000, during the premiership of Ehud Barak.

With Oslo, Israel recognized the PLO and allowed Yasser Arafat's terrorist army to enter Judea and Samaria, but until his last breath, Yitzhak Rabin adhered to the Labor Party's territorial positions and the broad national agreement in Israel.

In his final speech in the Knesset on the eve of his 1995 murder, he presented his political legacy, which was entitled "There will be no withdrawal to the 1967 lines."

The speech dealt with his red lines in the negotiations for a final status agreement. They included the entirety of Jerusalem and its environs coming under Israeli sovereignty; Israeli possession of the Jordan Valley in the broadest sense (including the eastern hills of Judea and Samaria, up to where the Palestinian population began); and strengthening the settlement blocs in Judea and Samaria.

At Camp David, Barak shattered national consensus and crossed these red lines. He proposed an independent Palestinian state based on the 1967 borders, with symbolic exchange of territories, dividing Jerusalem, withdrawing from the Jordan Valley, etc.

Although this proposal was rejected in blood and fire, Ehud Olmert offered an even more placatory version, which was also rejected outright. Despite the double rejection and given that Israel has not since presented a new official position regarding the future of Judea and Samaria, this proposal was effectively the most recent to come out of Jerusalem.

Since this was a foolhardy and dangerous proposition that runs counter to Israel's national interests, the time has come for a new political initiative.

Rabin's principles are the basis of the Israeli national consensus that was trampled upon. The time has come to return to this national consensus, but this time in a way that will substantively and significantly consolidate its position through annexation - that is, applying Israeli laws and order in the Greater Jordan Valley and the settlement blocs.

Israel's last annexation was of the Golan Heights in 1981. More than 37 years passed until American recognition of this move, and over the years, international recognition of our sovereignty over the Golan was just a dream.

True statesmanship is the ability to leverage certain situations to advance Israel's diplomatic status, and the Trump administration offers a window of opportunity for such a Zionist diplomatic initiative.

Israel should not miss this opportunity. It would make a statement not only about the territories that are annexed, but also those that aren't. These territories would be part of peace negotiations, as soon as there is a Jordanian-Palestinian partner for a genuine peace based on compromise.

And what about the isolated communities outside the blocs? As long as there is no peace, normal life should be allowed continue there.

But if there is a peace agreement, these communities will be able to choose between moving to the nearest settlement bloc that would be annexed by Israel, or remain under foreign sovereignty.

The annexation of the Jordan Valley and the settlement blocs is a step that would strengthen the State of Israel, its sovereignty and security, and revitalize the broad national consensus.

Such a move may be the basis for a national unity government built around the Likud and the Blue and White party. Of course, Blue and White must first be released from the grip of the so-called "center-left bloc," and join in this worthy endeavor.