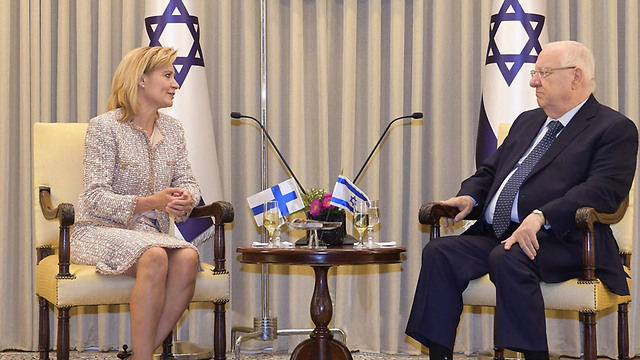 In wake of consistent harassment of Israel's mission, Finnish Ambassador to Israel Kirsikka Lehto-Asikainen celebrates decades of strong bilateral ties, says her country will fight anti-Semitism in any form

The relations between Finland and Israel are long-standing, strong and diverse. We have active cooperation in the fields of trade and economy, culture and science.

The Embassy of Finland in Tel Aviv is striving for strengthening further dialogue and cooperation between our countries together with our Honorary Consuls in Israel.

We have lots of common interests for instance in innovation, high-tech and start up sectors. Also people-to-people relations are vibrant.

More and more Israeli tourists visit Finland. Next year we will celebrate 70 years of diplomatic relations between Finland and Israel.

The Government of Finland takes very seriously vandalism and attacks against the Embassy of Israel in Helsinki, Finland during recent months.

The Finnish authorities relate to any suspected hate-crime or act of racism, including those with anti-Semitic motives, with utmost concern.

Finland is committed to combatting anti-Semitism as a part of its activities to fight discrimination and racism in order to guarantee the right of freedom of religion and opinion.

The Finnish Government fully acknowledges its duties under international agreements to protect the safety of foreign missions in Finland. Finland does not tolerate any form of vandalism targeted on foreign missions.

The police authorities in Helsinki, as well as the Ministry for Foreign Affairs Finland have regular contact with the Embassy of Israel in Helsinki regarding security issues.

Relevant Finnish authorities have taken actions in this respect. These actions include increasing police patrols to monitor the Israeli Embassy and the residence premises.

The reported crimes and incidents are currently being investigated by the authorities.

Anti-Semitic crimes are relatively uncommon in Finland. Nevertheless, we share the concern on the increase of anti-Semitism in Europe and worldwide.

The Finnish Government has adopted the working definition of the International Holocaust Remembrance Alliance (IHRA) formulation on anti-Semitism. We implement and promote it nationally, within the European Union and internationally.

In our view, education has a key role in preventing racism, extremism and hate speech. The Finnish basic education and high-school curricula include these aspects as well as holocaust as a historical and human rights question. There is close and active cooperation between the Finnish Ministry of the Interior, the police and the Jewish community in Finland to combat anti-Semitism and security threats on the community. Government funding is allocated to improve and ensure safety of the synagogue and the community center in Helsinki.

Confronting anti-Semitism, racism and xenophobia is a common endeavor, and Finland takes part in this cooperation.

Finland has zero tolerance for racism and our Government is committed to combatting discrimination in all sectors of society.

The promotion of human rights, the rule of law, democracy, peace, freedom, tolerance and equality also forms the central element of the value base on which Finland’s foreign and security policy rests.