The funeral of the 5 workers killed in the blast
Photo: AP 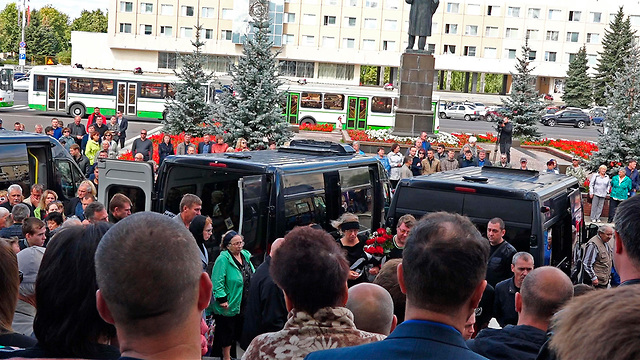 Russia's state weather service says radiation levels have risen by up to 16 times since last week after an explosion during a rocket engine test; Russia's state nuclear agency said 5 of its workers were killed in the blast

Russian authorities have recommended residents of Nyonoksa leave their village while work is carried out nearby following a rocket engine accident that caused a spike in radiation last week, Interfax news agency cited local officials said. Russia's state weather service said radiation levels spiked in the Russian city of Severodvinsk by up to 16 times last Thursday after what officials say was an explosion during a rocket engine test on a sea platform.

The funeral of the 5 workers killed in the blast (Photo: AP)

"We have received a notification...about the planned activities of the military authorities. In this regard, residents of Nyonoksa were asked to leave the territory of the village from August 14," authorities in Severodvinsk were quoted as saying.

In addition, medics who treated victims of the accident have been sent to Moscow for medical examination, TASS news agency cited an unnamed medical source as saying earlier on Tuesday.

The funeral of the 5 workers killed in the blast (Photo: AP)

No official explanation has been given for why the explosion caused a radiation spike. Russia's state nuclear agency has said five of its workers were killed.

The medics sent to Moscow have signed an agreement promising not to divulge information about the incident, TASS cited the source as saying.