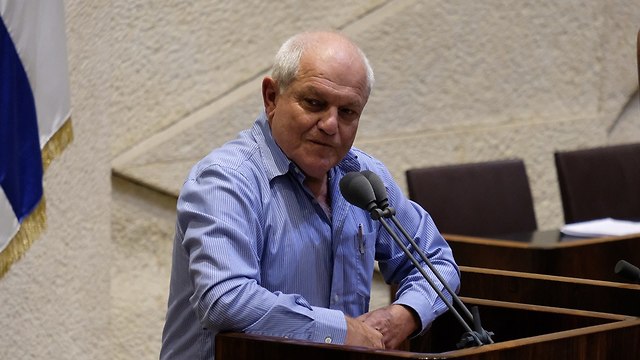 Welfare minister accused of advancing legislation to benefit his friend, businessman Mordechai Ben-Ari who is also being charged; Katz mulls seeking immunity from Knesset instead of resigning to stand trial

Attorney General Avichai Mandelblit on Wednesday informed Welfare Minister Haim Katz' lawyers that he has decided to indict him for alleged fraud and breach of trust.

According to Mandelblit, Katz helped his friend - businessman Mordechai Ben-Ari – by promoting legislation in the Knesset, which is both in contravention of the law and a clear conflict of interest.

More serious charges of bribery against Katz, a Likud lawmaker, were dropped following his pre-indictment hearing.

Mandelblit believes that Katz should resign over the decision to indict him, but the minister is considering asking the Knesset for immunity.

Ben-Ari will also be charged with fraud and breach of trust, as wekk as insider trading.

An experienced trader, Ben-Ari has since 1999 has served as an economic advisor to Equital, a public holding company prominent in the Israeli market, which controls various companies including Airport City, JOEL (Jerusalem Oil Exploration Ltd) and Isramco.

His role included providing financial advice to the Equital group, managing the money and financial portfolio of the group's companies, raising capital, and so on.

By virtue of this role, Ben-Ari was engaged in securities trading using the group's accounts. He also managed his own private equity portfolio, which included bond holdings among other things.

According to the indictment, Katz and Ben-Ari developed a close friendship over the years, while at the same time the two shared mutual economic interests.

The indictment states that in 2010, at Ben-Ari's initiative, Katz submitted a private member's bill known as Amendment 44 to the Securities Law.

Katz allegedly knew that Ben-Ari had significant economic interest in promoting the bill, both due to his role in the Equital group and for his own person portfolio but decided to advance the legislation anyway.