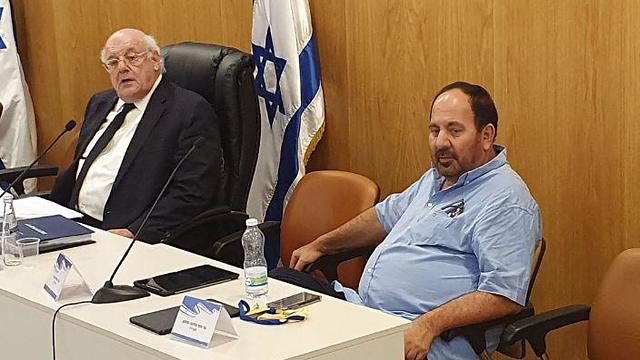 Otzma Yehudit allowed to run on September 17 due to tied voting in Central Elections Committee; Lapid slams missing representative, says Labor will be to blame if racist party enters parliament

Extreme-right party Otzma Yehudit (Jewish Power) narrowly escaped a ban on running in the Knesset elections next month when the absence of a Labor Party representative on the Central Elections Committee resulted in a tied vote on the issue.

The committee headed by Supreme Court Justice Hanan Melcer met Wednesday morning to discuss disqualification requests for Otzma Yehudit, the Joint Arab List, and Yesh Atid (which is currently folded into the Blue and White party). The committee includes members from a range of political parties, and each party is allocated an number of seats according to its size.

As the vote was not in a favor of a ban, the Otzma Yehudit candidates - Baruch Marzel, Itamar Ben Gvir and Bentzi Gopstein - can compete in the September 17 elections.

Representatives on the committee from the Blue and White, Labor and Arab parties all supported the ban on Otzma Yehudit, while the Likud, religious and other right-wing parties opposed it, leading to a 15-15 tied vote. Had Labor representative Sami Shoshan (who is also the brother-in-law of party leader Amir Peretz) been present, the ban would have been implemented.

The Blue and White rmembers of the committee asked that the vote be delayed until Shoshan returned, but it was too late.

"It was just a mishap. I was at the committee all day. My replacement was supposed to be here, but he did not arrive," Shoshan told Ynet.

"It was a human error, there was no intention to skip the vote and there was no deal. I hope they allow me to vote again."

The Labor Party also attributed the missed vote to a simple mistake.

"Due to human error, one of the two Labor party officials was absent from the hall during the vote, and therefore the vote was tied. The issue was examined by the party's campaign headquarters.

Nonetheless, Labor came under fire from other members of the center-left bloc for missing the vote.

"What is going on in the Central Elections Committee is a scandal," wrote Blue and White MK Yair Lapid on Twitter. "There was a majority to reject the racist Otzma Yehudit party, but the Labor representative was not around. If there is racism in the Knesset, the Labor Party will bear the majority of the blame."

By law, the committee is empowered to ban a candidate for denying the existence of the State of Israel as a Jewish and democratic state, inciting racism or supporting the armed struggle of an enemy state or terrorist organization against the state.

The commitee's rulings are not binding, however, and any decision to disqualify a candidate must be approved by the High Court.

Attorney General Avichai Mandelblit on Tuesday informed the Central Election Committee that he recommended banning Marzel and Gopstein due to allegations of racism and incitement, but excluded Ben-Gvir and the Otzma Yehudit party as a whole.

"There is a critical mass of evidence, much more than needed, proving that there has been severe, clear and undisputed incitement to racism by (Gopstein, Marzel) over the years," wrote Mandelblit.

Mandelblit found no reason to disqualify Yesh Atid and the Joint Arab List.

Otzma Yehudit is the latest incarnation of the Jewish National Front, which was established ahead of the 2006 elections, but its roots are in the Kach movement, which racist rabbi Meir Kahane established in the 1970s.

After the 1994 Cave of the Patriarchs massacre, when Kach member Baruch Goldstein murdered 29 Palestinian worhsippers at the Ibrahimi Mosque in Hebron, all factions of the movement were recognized as terror organizations and subsequently outlawed.

The Jewish National Front was founded by Baruch Marzel, who was a prominent activist in the Kach movement in his youth. In 2006, the party waged an extremist campaign, filled with incitement against party leaders both on the left and the right.

At one campaign rally, Marzel told supporters that, "We need to carry out a targeted killing against (Ariel) Sharon and (Shimon) Peres at the polls. They're a danger to Israel."