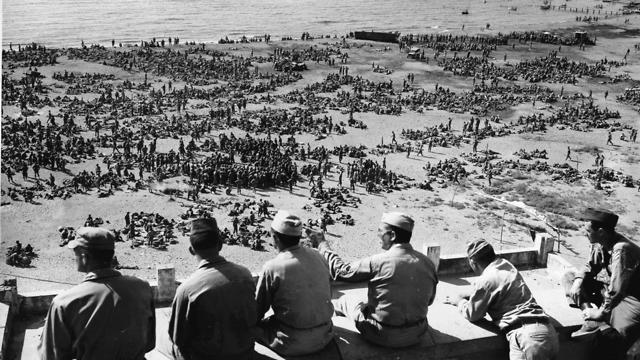 Ten weeks after commemorating the 75th anniversary of the D-Day invasion in Normandy, France is paying tribute this week to Allied troops involved in another major, but often overlooked, military operation: landings on the Mediterranean coast

PARIS -- For Allied troops in Europe, D-Day was just the beginning of a long and bloody push toward victory over the Nazis.

Ten weeks after commemorating the 75th anniversary of the D-Day invasion in Normandy, France is paying tribute this week to Allied troops involved in another major, but often overlooked, military operation: landings on the Mediterranean coast.

Thousands of U.S. 3rd Division troops wait to board Landing Ships Tanks on an unidentified beach in Italy in preparation for Operation Dragoon, August 10, 1944
With a dwindling number of veterans alive to share their stories, countries around Europe are making a special effort to mark the 75th anniversary of this and other battles in Europe that helped bring an end to World War II. Here's a look at some key military moments:

On June 6, 1944, more than 150,000 Allied troops composed of U.S., British and Canadian soldiers and others landed on the beaches of Normandy in northwest France. That single day, over 4,000 died on beaches that were foreign to them.

For weeks after that, Allied forces struggled to punch through Normandy's German-held countryside. They weren't able to head eastward until the end of August. The Battle of Normandy was a turning point in the war, marking the beginning of the end of Europe's Nazi occupation.

First intended to coincide with the landings in Normandy, the Mediterranean landings known as Operation Dragoon were delayed due to lack of resources.

Starting on Aug. 15, 1944, French and American troops -- 350,000 in total -- landed on the French Riviera. U.S. forces drove north while French troops -- many from French colonies in Africa -- moved along the coast to secure key ports. Marseille, France's second city, was liberated on Aug. 28.

American and allied troops wade through the water from a Landing Ship Tank on an unidentified beach, east of Toulon, southern French riviera, as part of Operation Dragoon, August 16, 1944
Soldiers from the Normandy landings, known as Operation Overlord, met troops from Operation Dragoon on Sept. 12 near Dijon, in the eastern region of Burgundy. Most of France was under control of Allied forces by the end of September.

The fighting for Paris took place in late August 1944. The French Resistance staged an uprising against German soldiers and vehicles and built barricades in the streets of the capital.

A bridge too far

Allied troops on the western front lines also moved into Belgium, the Netherlands and Luxembourg -- but ran into a stinging defeat in September 1944. In a military miscalculation immortalized in the Hollywood film and Cornelius Ryan's book "A Bridge Too Far," paratroopers landed near Arnhem in the eastern Netherlands and tried to capture its bridge across the Rhine. Military strategists hoped Operation Market Garden would end the war by Christmas by providing a springboard for ground forces into Germany's industrial heartland. But it ground to a halt at Arnhem where Allied troops found themselves outnumbered and outgunned. More Allied troops -- about 11,500 -- died in the nine days of Operation Market Garden than in the D-Day landings.

American and allied troops wade through the water from a Landing Ship Tank on an unidentified beach, east of Toulon, southern French riviera, as part of Operation Dragoon, August 16, 1944

Battle of the Bulge

Then, on Dec. 16, Adolf Hitler launched a major offensive with over 200,000 troops through the Ardennes hills and forests, which became known as the Battle of the Bulge.

The Nazis hoped the surprise attack would reach the Belgian port of Antwerp and split the advancing Allied armies in two. But it only created a "bulge" instead. U.S. troops led by paratroopers of the 101st Airborne Division were surrounded at a critical junction in Bastogne, but resisted and the key crossroads was never taken. U.S. troops suffered some 75,000 casualties in the overall battle, which was won by the end of January 1945. Germany had 80,000 or more casualties.

Allied anti-aircraft gunners who had earlier landed on the southern coast of France, fill the air with flak as they fight off a night air raid by German planes during the Mediterranean D-Day, August 21, 1944

From the east, the Red Army pressed a series of sweeping offensives all across the 4,400-kilometer (2,730-mile) front line from the Murmansk Peninsula in the Arctic to the Black Sea in the south. Soviet troops routed the Nazis in Belarus, drove German forces out of Ukraine and the Baltics and rolled into Poland and the Balkans. The Soviets then led the decisive Battle of Berlin and liberated Auschwitz, the most notorious of Nazi concentration camps.

Auschwitz prisoners after the liberation of the Nazi death camp (Photo: AP)

Following a succession of Nazi defeats and the suicide of Adolf Hitler, Germany signed the instrument of surrender on May 7, 1945, in Reims in eastern France. The document stipulated that hostilities had to cease the next day. It was ratified on the night of May 8 in Berlin. Since it was already past midnight in Eastern Europe, Russia and some other countries celebrate the victory on May 9, marking the end of World War II in Europe.