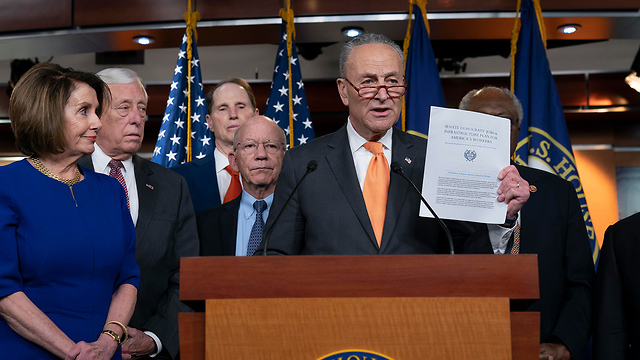 'Many strong supporters of Israel will be deeply disappointed in this decision,' Senator Chuck Schumer said, as backlash to decision not to allow pro-BDS congresswomen to enter Israel starts to unfold

Israeli officials should reverse their decision to block a visit by two U.S. Democratic lawmakers — Representatives Rashida Tlaib and Ilhan Omar — who have been critical of the country, U.S. Senate Democratic Leader Schumer said in a statement on Thursday.

"It will only hurt the U.S.-Israeli relationship and support for Israel in America," Schumer wrote. "No democratic society should fear an open debate. Many strong supporters of Israel will be deeply disappointed in this decision, which the Israeli government should reverse."

Denying entry to members of the United States Congress is a sign of weakness, not strength. It will only hurt the U.S.-Israel relationship and support for Israel in America.

No democratic society should fear an open debate. Many strong supporters of Israel will be deeply disappointed in this decision, which the Israeli government should reverse.

Nancy Pelosi, speaker of the U.S. House of Representatives also slammed Israel for the decision not to allow her two party members in.

"Israel’s denial of entry to Congresswomen Tlaib & Omar is beneath the dignity of the great State of Israel," Pelosi Tweeted.

The two Democratic U.S. lawmakers did not plan "a balanced visit" with both Israeli and Palestinian leaders, the U.S. ambassador to Israel said in a statement on Thursday backing the decision.

Netanyahu said earlier: "As a vibrant and free democracy, Israel is open to every critic and criticism, with one exception: Israeli law prohibits the entry of people who call for and carry out a boycott of Israel, as is the case with other democracies that prevent the entry of people whoas positions harm that country. This is how the U.S. acted towards an Israeli Knesset member and other public figures in the world."

Netanyahu added that, “Congresswomen Tlaib and Omar are leading activities to promote boycott legislation against Israel in the U.S. Congress. Only a few days ago, we received their visitation plan, which showed they were planning a campaign whose sole purpose is to strengthen the boycott and deny Israel's legitimacy. They said their destination was ‘Palestine’ and not ‘Israel,’ and unlike all Democratic and Republican congressmen to this day, refrained from seeking a meeting with any Israeli official either in the government or the opposition. "

The prime minister said that the trip was funded by an organisation that backs BDS and whose supporters also are in favour of terrorism.