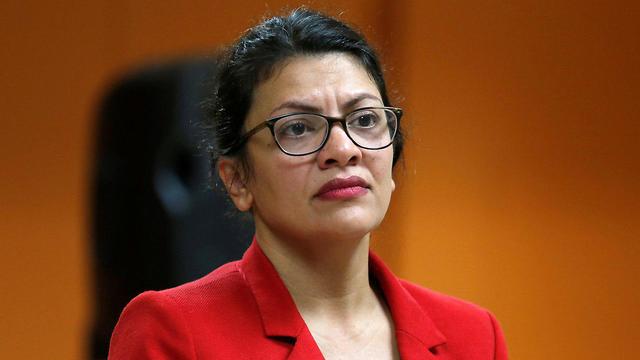 Democratic congresswoman denied entry over BDS support, commits to respecting restrictions so she can visit elderly grandmother but than changes her mind

Palestinian descent U.S. Congress member Rashida Tlaib announced she will not be visiting Israel, despite the approval of her request to enter in order to visit her grandmother after an earlier decline due to her support of BDS.

Earlier Friday, Interior Minister Aryeh Deri approved Tlaib's request to enter the country after she sent him a letter Thursday night saying she will respect the Israeli law and will not work to promote a boycott on the country during her visit.

After Tlaib tweeted that she will not be giving in to Israeli conditions and will thus not be visiting the country, Deri responded with a tweet saying she had exposed her true motives for the visit, which are calling for a boycott on Israel.

I approved her request as a gesture of goodwill on a humanitarian basis, but it was just a provocative request, aimed at bashing the State of Israel. Apparently her hate for Israel overcomes her love for her grandmother.@realDonaldTrump @RashidaTlaib

Silencing me & treating me like a criminal is not what she wants for me. It would kill a piece of me. I have decided that visiting my grandmother under these oppressive conditions stands against everything I believe in--fighting against racism, oppression & injustice. https://t.co/z5t5j3qk4H

Tlaib, who was denied entry to Israel Thursday over BDS support, discussed with the Israeli embassy in Washington the conditions for a family visit earlier Friday, and a permission to enter the country was granted to her for humanitarian reasons.

Tlaib sent Interior Minister Aryeh Deri a letter overnight Thursday saying that she wishes to enter Israel to visit her grandmother, who s in her 90's, since "this could be her last opportunity of seeing her."

Tlaib added that she will "respect restrictions and will not call for boycotts against Israel" during her visit.

The congresswoman's grandmother lives in the Palestinian village of Beit Ur al-Fauqa near the city of Modi'in; Tlaib herself was born in the U.S. after her parents immigrated there.

Congresswoman Ilhan Omar, who was also supposed to visit Israel, will not be joining her. Tlaib is expected to arrive on Sunday is she signs an agreement not to use to occasion for political causes. Following the decision to bar the two congresswomen from entering Israel, Prime Minister Benjamin Netanyahu said Thursday that “congresswomen Tlaib and Omar are leading activities to promote boycott legislation against Israel in the U.S. Congress. Only a few days ago, we received their visitation plan, which showed they were planning a campaign whose sole purpose is to strengthen the boycott and deny Israel's legitimacy."

"They said their destination was ‘Palestine’ and not ‘Israel,’ and unlike all Democratic and Republican congressmen to this day, refrained from seeking a meeting with any Israeli official either in the government or the opposition, " the prime minister added.

Netanyahu said that the trip was funded by an organization that backs BDS and whose supporters also are in favor of terrorism.

“The interior minister decided not to allow their visit, and I as prime minister support his decision,” Netanyahu said.