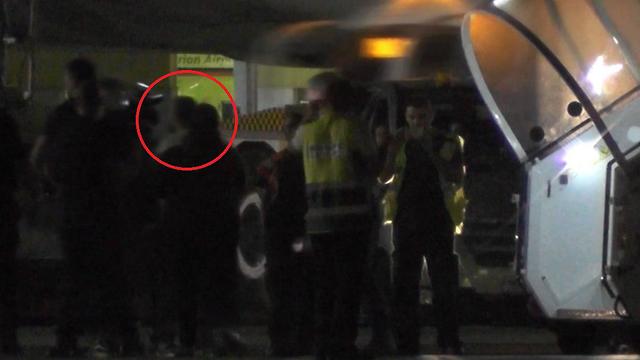 Telegrass founder lands in Israel after being extradited from Ukraine

The head of drug trafficking network, Amos Dov Silver, arrives at Ben-Gurion Airport after escaping from a Duty-Free shop in Kiev just hours before he was supposed to be extradited; the weed kingpin was apprehended with the help of Israeli authorities after a 2-day manhunt

The founder and manager of the online drug-dealing network Telegrass arrived in Israel on Sunday after being extradited from the Ukraine following a failed escape attempt.

In March, police arrested 42 of the channel's operators - 39 in Israel and three abroad - including Telegrass founder and manager Amos Dov Silver, a U.S. resident who was detained during a visit to Ukraine. Arrests were also made in Germany and the United States.

Police vehicles were waiting at Ben-Gurion Airport and shortly after landing from Kiev - sometime around 5am - officers got on the plane to escort the handcuffed Silver.

Silver was taken away in a police vehicle stationed on the runway outside the aircraft. The police said Silver was later transferred to the detectives from Lahav 433 crime unit, which conducted the investigation against Telegrass operators in collaboration with Central Police Unit and Israel Tax Authority's Crime Investigation Unit.

Silver, who escaped shortly before being extradited from Ukraine was arrested on Saturday morning in the city of Uman at the end of a two-day manhunt.

The Ukrainian security services said that three of its members were also arrested on suspicion of helping Silver escape the Boryspil International Airport in Kiev before he was supposed to board the plane to Israel.

Israeli authorities said that Silver was arrested after a "swift and determined" search by the Ukrainian police, in full cooperation with Israeli security services.

Silver was taken to the Kiev airport on Thursday evening immediately after the Supreme Court approved the extradition to Israel. While waiting for his flight, Silver entered a Duty-Free shop and escaped the premises after removing the electronic handcuff from his hand.

The Ukrainian police did not update the Israeli police in real time - and therefore no Israeli representatives were present at the airport.

After being apprehended on Saturday, following a two-day manhunt, Silver claimed that he had been beaten bloody while he was held in custody in Ukraine.

Other suspects in the case arrested over five months ago were indicted for brokering the trafficking of dangerous drugs, drug offenses involving the corruption of minors, obstruction of justice and other felonies.

Senior operators of the network are also accused of money laundering and tax offenses.