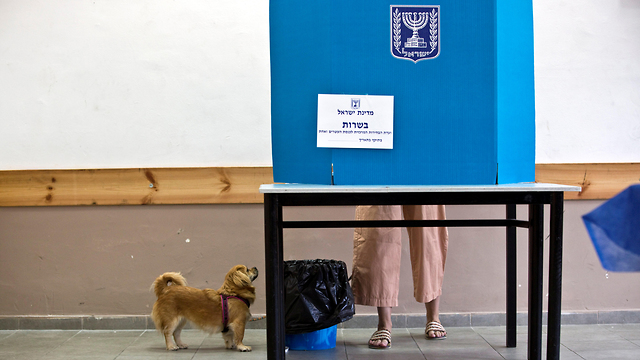 The dangers of Israel's election apathy

Opinion: Be it the August heat, summer holidays or simply the grim unfeasibility of a functional government — Israel is tired of elections; but ennui has a price, and low voter turnout could mean we end up with fringe extremist parties crossing the threshold

We're tired of elections. And not just us. Politicians seem to be lacking the energy for these elections, and thus don't really do anything about it. We're less than a month away from the polls, and Netanyahu released one video that also looks like an effort. Blue and White barely had the energy to publish a response, and the only heat we're feeling is the heat of infighting — this week it’s a suspected mole inside Blue and White, and last week it was right-wingers Bezalel Smotrich, Benjamin Netanyahu and Ayelet Shaked battling it out.

A Tel Aviv voting station in the April elections (Photo: Reuters)
Nothing in the air or in the media implies we only have a month until elections, and voters are getting the message, which could lead to dangerous indifference.

We can speculate about why the system feels so numbed. Perhaps it's August, the terrible heat and the summer vacation, not to mention that many Israelis, including politicians, are on holiday either in Israel or abroad.

Who has the energy to deal with elections from the splendor of a Greek tavern or an Galilee swimming pool?

But that's not the whole story. The 2019 elections redux had one goal: electing a Knesset capable of assembling a government — and hopefully a stable one.

That was what everybody hoped for on the night the 21st Knesset decided to disassemble. But 80 days later, things seem even more grim: If in May forming a government seemed impossible, now it appears to be in the realms of the legendary.

The Likud mobile studio to campaign around the country (Photo: Alex Gamburg)
If we believe the polls, there actually isn't any plausible political constellation that can produce a 61-MK coalition: Avigdor Liberman won't sit in a government that isn't a national unity one; Blue and White won’t sit with Netanyahu; the ultra-Orthodox won't sit with Yair Lapid and Liberman won't sit with either the ultra-Orthodox or the Arab parties. No matter how we play around with the numbers, none of this adds up to a government — never mind stability or productivity. The outcome is, of course, public indifference. What are elections good for if it can't get Israel out of the mess it is in? That's why voter turnout is likely to be low this time around, as low as it used to be about a decade ago, and far lower than we experienced in the past three election rounds.

The Central Elections Committee meets to debate a ban on extremist party Otzma Yehudit (Photo: Amit Shabi)
The problem is, that when voter turnout is low, the number of votes needed to pass the electoral threshold also drops, making unexpected scenarios become more likely. The lower voter turnout is, the higher the power parties with especially eager supporters win. And so, parties like Otzma Yehudit (Jewish Power) or Zehut (Identity), which are currently unlikely to pass the threshold, could surprise us all by becoming a game changer in the 22nd Knesset. Is the Israeli political system ready for this kind of scenario? It's doubtful.