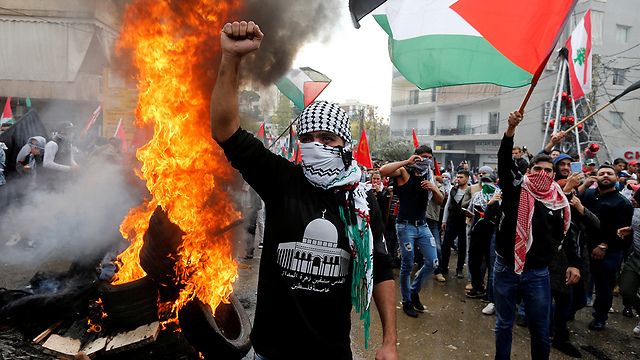 The conference initiated by the U.S Embassy in Jerusalem, set to bring together alumni of U.S. educational and cultural programs was canceled after Palestinians deem it an attempt to circumvent boycott of U.S. administration

The U.S. Embassy in Jerusalem on Monday was forced to postpone a conference it organized in the West Bank city of Ramallah after Palestinian officials and factions called for a boycott and threatened to organize protests.

The Palestinians cut all ties with the U.S. after it recognized disputed Jerusalem as the capital of Israel in 2017, and view the Trump administration as unfairly biased following a series of actions seen as hostile to their aspirations for an independent state.

Protest outside U.S. Embassy in Beirut after Donald Trump announced he would be moving the American embassy from Tel Aviv to Jerusalem (Photo: Reuters)

The embassy had organized a conference this week to bring together alumni of U.S. educational and cultural programs, including dozens of Palestinians from the Gaza Strip who received permission from Israel to attend.

The territory has been under an Israeli-Egyptian blockade since the Islamic militant group Hamas seized power there in 2007.

The Palestinian leadership viewed the conference as an attempt to circumvent its boycott of the U.S. administration.

"We are aware of recent statements regarding a planned event for alumni of U.S. educational and cultural programs," the U.S. Embassy said. "In order to avoid the Palestinian participants being put in a difficult situation, we have decided to postpone the event for now."

Arab lawmakers and hundreds of protestors outside the U.S. Embassy in Jerusalem (Photo: AP)

It said this and other events "are designed to create opportunities for exchange and dialogue between Americans and Palestinians at the grassroots level."

"This event in particular is intended to give alumni of all ages and backgrounds from Jerusalem, the West Bank and Gaza an opportunity to network with each other and to engage in leadership and capacity building activities," it said.

The Trump administration is at work on a long-awaited peace plan, but has not endorsed a two-state solution to the conflict. The Palestinians have already dismissed the plan, saying it is certain to be slanted toward Israel.

Representatives of several Palestinian factions held a press conference Monday at the hotel where the meeting was to have taken place.

Prime Minister Benjamin Netanyahu and his wife Sara with Ivanka Trump and Jared Kushner at the inauguration of the U.S. Embassy in Jerusalem (צילום: קובי גדעון, לע"מ)

Spokesman Isam Baker told The Associated Press that the Palestine Liberation Organization, an umbrella group, had reached out to the hotel management and the invitees asking them to boycott the meeting.

"Most of the invitees and the hotel administration agreed with us that the invitation has political implications and it is not innocent," he said.

"The U.S. administration, which has cut off all aid to our people, shut down our office in Washington and placed huge pressure on our leadership to accept a pro-Israel political plan will not do any good for our people," he said. "Therefore, we are boycotting any activities it organizes."

A statement released Sunday by the "national and Islamic forces of the Ramallah governorate" said they were determined to thwart the conference, calling it an attempt to "break the will of the Palestinian people." It said they planned to organize a "mass popular event to prevent this activity by all available means," calling for a sit-in and marches.

The youth wing of Palestinian President Mahmoud Abbas' Fatah party also called for a boycott. It vowed to "exercise all forms of legal and popular pressure to express rejection of this conference being held on occupied Palestinian land."

It also called for an "apology" from the hotel.