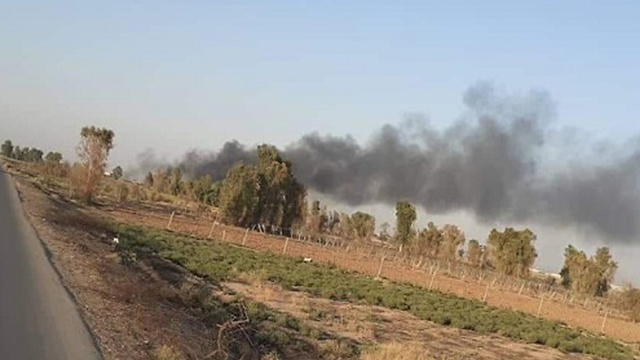 Iraqi security officials say an explosion has happened in an arms depot belonging to an Iranian-backed militia faction north of Baghdad, following several similar evets, some attributed to Israel

Several blasts hit a position held by Iraqi Shi'ite paramilitaries next to Balad air base north of Baghdad on Tuesday, an Iraqi military official and a source in a paramilitary group said.

It was one of a series of explosions in recent weeks at weapons depots, with some if the events attributed to Israel, in bases or positions belonging to factions within the Popular Mobilisation Forces (PMF), Iraq's umbrella of mostly Shi'ite Muslim paramilitary groups.

Balad base hosts U.S. forces and contractors and is located about 80 km (50 miles) north of Baghdad. A PMF group that is backed by Iran is stationed nearby.

The military official said the intended target of the blasts was the group's position near the base. The paramilitary source said his group's weapons depot was specifically targeted by an aerial bombardment.

The U.S.-led coalition could not immediately be reached for comment. There were no immediate reports of casualties.

Smoke above the site attacked in Iraq
Witnesses said the explosions caused stored rockets to fly into nearby orchards and into Balad base itself. Last week, a blast at a weapons depot run by a PMF group sent rockets careening across southern Baghdad, killing one person and wounding 29 others. Police at the time attributed the explosion to poor storage and high temperatures, but a government investigation is underway. Prime Minister Adel Abdul Mahdi last week ordered all ammunition dumps belonging to the armed forces or paramilitary groups to be moved outside of cities. He also cancelled all special flight permissions for Iraqi and foreign aircraft, meaning sorties including by the U.S.-led coalition operating against Islamic State militants must be cleared in advance by the prime minister.

Smoke above the site attacked in Iraq
Some analysts have suggested the strikes might have been carried out by Israel, which last year signalled that it could attack suspected Iranian military assets in Iraq, as it has done with scores of air strikes in Syria.

Israeli officials have suggested recently they view Iraq, whose main ally is Israel's regional foe Iran, as more of a threat than in recent years, but have not directly commented on the recent blasts at PMF sites in Iraq.

The U.S. coalition has denied any involvement in the recent explosions.

No one has claimed responsibility for Tuesday’s explosion near the Balad air base in Salaheddin province or either of the other two explosions.

In response, Iraqi Prime Minister Adel Abdul-Mahdi last week banned unauthorized flights throughout the country. The officials who confirmed the explosion spoke on condition of anonymity in line with regulations.