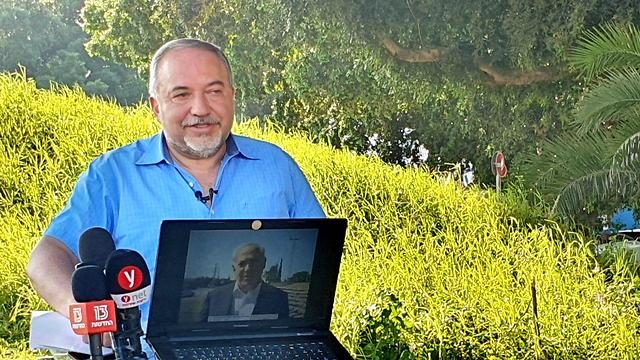 Liberman is playing Netanyahu at his own political game

Opinion: When the prime minister brands his opponents as 'leftist,' he is using it as a derogatory term, but the Yisrael Beytenu leader and his former chief of staff is turning the tables and reminding voters he - a settler who doesn't make deals with Hamas - is the more legitimate right-winger

Yisrael Beytenu leader Avigdor Liberman is blurring the traditional lines between the binary political ideology between the left and the right used by Prime Minister Benjamin Netyanyahu to bolster his own support and demonize his foes.

He describes himself as a member of the Israeli right-wing who resides in a West Bank settlement, but his recent political moves indicate he might be making a shift.

His latest campaign is almost exclusively about religion and state, a subject not easily defined as left or right, allowing him to cooperate with the centrist Blue and White Party.

Netanyahu likes to brand his political opponents as "leftists," using it as a derogatory term. But Liberman is unfazed by the title - believing it will not stick.

"The man from Caesarea (where Netanyahu owns a home) is calling the man from Nokdim (a West Bank settlement) a leftist," he mused.

On Tuesday, Yisrael Beytenu signed a surplus vote agreement with the Blue and White Party, and while its leader insisted on calling the move a technical step, he remains unashamed by it as it portrays him as confident in his election chances.

Blurring the line between the left and the right in Israeli politics is a gamble taken by the former defense minister and is an indicator to voters who he will recommend as the next prime minister after the September 17 vote.

The ruling Likud party was quick to release their campaign message connecting Liberman to the Israeli left.

Netanyahu was filmed standing on his hotel balcony in Kiev speaking to potential Yisrael Beytenu supporters after the vote sharing agreement was revealed, telling them their votes may bring about a left-wing government should they remain loyal to their party.

But Liberman's response was quick to come.

"Netanyahu makes deals with Hamas and I make a deal with the Blue and White Party… I think mine is better," he tweeted, referring to the government's agreement to allow Qatari money into the Gaza Strip in exchange for calm on Israel's rocket-battered southern border.

Surplus vote agreements are a technical component of elections, but they do play a role in drawing the political map and are expected to make sense to voters, inasmuch as a vote for the right is not supposed to be counted on the left and vice versa.

Yet despite Netanyahu's many attempts in recent months to put a dent in his opponent's right-wing public image, Liberman's reputation remains unchanged.

If this latest agreement with Blue and White passes without affecting his numbers, he will certainly be the deciding factor in who Israel's next leader will be.