Soldiers at the market in Hebron
Photo: AFP 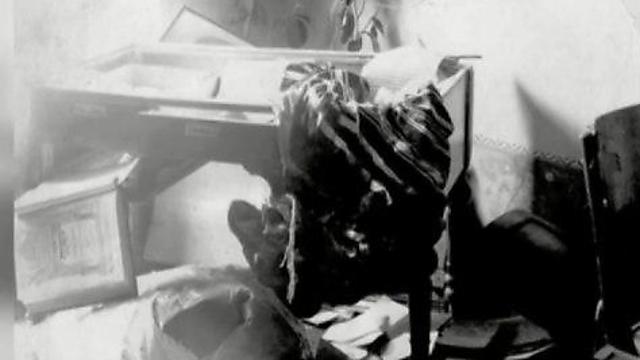 As Jewish residents of West Bank city press for resettlement of land abandoned after massacre of dozens of local Jews in August 1929, premier caught between threat of renewed Palestinian protests and prospect of alienating right-wing voters in next month's election

The settlers in Hebron have demanded Prime Minister Benjamin Netanyahu allow Jews to resettle what is now the city's old abandoned market, days before the 90th anniversary of the riots in the West Bank city in which dozens of local Jews were killed.

The settlers raised the demand ahead of the upcoming anniversary of the 1929 Arab riots, which will be held on September 4 - a week and a half before Israel goes to the polls for second time this year.

Jewish property ransacked in the 1929 riots

The riots of August 1929 began when a long-running dispute over access to Jerusalem holy sites escalated into violence. Members of the local Arab community launched savage attacks on Jewish neighbors and their insitutions, killing at least 67 Jews.

The Jews of Hebron left the city in the wake of the riots. Their land fell first into the hands of local Arabs and later came under Jordanian rule, during which time the market was built on the area.

The land was never returned to the Jewish community and settlers have been trying to reclaim it since Israel captured Hebron during the 1967 Six-Day War. Today some 800 settlers live in Hebron, alongside around 250,000 Palestinians.

The market has been abandoned for the past 25 years, since the IDF closed the compound due to security considerations in 1994. A new market was established in a different location in the city.

The fight to have the land placed back in Jewish hands hit a major hurdle in 2006, when Deputy Attorney General Mike Blass decided the market area belonged to the Palestinian Hebron municipality under a statutory tenancy agreement.

Blass ruled that the tenancy agreement could not be abolished, therefore, the market area could not be rented out to Jews in Hebron.

The decision led to Israeli security forces carrying out the forceful removal of several Jewish families who were squatting in a building in the market area.

A desecrated synagogue in Hebron after the 1929 riots

The disputed market area has long been a no man's land, serving as a barrier between the Jewish settlers and Hebron's Muslim population.

But the fight to reclaim the land took a huge leap forward in November 2018, when Attorney General Avichai Mandelblit said there was no reason to prevent Jews from resettling the area.

The demand by Hebron's Jewish community, however, could place Netanyahu in a difficult position.

The prime minister does not want to spark a new conflict between Jews and Arabs in Hebron over the disputed land, but he also does not want to be portrayed as someone who disregards settler requests, soemthing that could lose him the vote of the Jewish electorate in the West Bank.

The government issued a statement in response to the property claims made by the settlers, saying the case is currently being handled by the authorities.

"The issues regarding Hebron were transferred to the National Security Council three months ago and there have been advanced discussions to formulate solutions to these issues," the statement read.