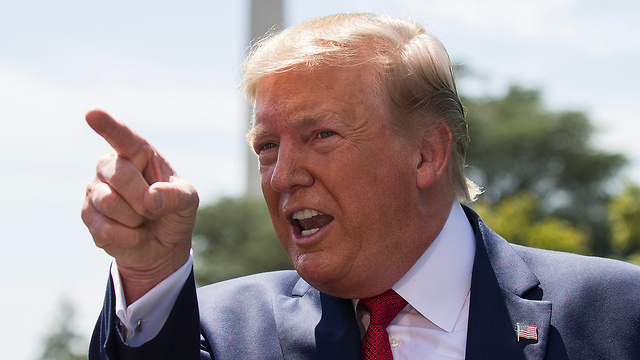 Trump's 'disloyalty' jibe shows he is no friend of Israel

Opinion: The president's recent remarks calling Jews who vote Democratic 'disloyal' to Israel resemble arguments made by white supremacists and are harmful to the American Jewish community

It is unclear whether Donald Trump, by the end of his term in office, will be remembered as Israel's greatest friend to ever sit in the White House, but until now, he could clearly have been called Israel's most embarrassing friend.

But not anymore. The comments made by the U.S. president have put him right up there with some of the anti-Semites he goes up against, mainly Cngresswoman Ilhan Omar. The Democrat from Minnesota accused American Jews of dual loyalty and Barack Obama's former White House chief of staff Rahm Emanuel rightly accused her of anti-Semitism.

Now it's Trump who accuses Jews supporting the Democratic Party of disloyalty.

According to Omar, the Jews are at least still loyal to the U.S., even if it's dual loyalty.

Trump takes it a step further, describing these Jewish voters as disloyal to Israel. And because most American Jews - 79% of them in fact - voted Democrat in 2016,  Trump's comments imply that the vast majority of U.S. Jewry is disloyal.

What else needs to happen for people to realize that Trump is a great friend of Benjamin Netanyahu, but not as much of a friend of Israel and the Jews?

In previous years there was an argument over the term "Israel Firsters", which targeted American Jews and accused them of being more loyal to Israel than to the United States.

This term reeks of anti-Semitism and Trump is now dabbling in this same pool, and someone making such omnibus allegations against the majority of American Jews cannot be considered a friend.

Trump uses the same anti-Jewish arguments used by other anti-Semites and old-time racists such as former KKK leader David Duke.

Trump supporters in Israel and the U.S. will probably leap from their seats with cries that Trump cannot possibly be anti-Semitic as he has Jewish grandchildren, he is an Israel supporter, he has done business with Jews all his life and a lot of his assistants are Jewish.

I wish it were true, because Trump's real test is how his actions affect the American Jewish population.

Most think that he is dangerous, that he is waking anti-Semitic demons and causing the community harm. The majority isn't always right, but in this case, it is.

I came back from a visit to the U.S. two weeks ago. I met with many Jews, most of whom were Democrats. Most love Israel, even if they don't support the Israeli government's every move – and they are terrified by Trump.

Now they are even more terrified and with good cause, because his dangerous statements were made for one reason - the presidential elections next year.

Trump wants to make people loathe the Democratic Party and any means are justified in his eyes, even if he makes Jews the scapegoat of his political game.

The president knows that anti-Semitic incidents over the past two years have all been perpetrated by white supremacists, and when he frames Jews as disloyal, he only adds fuel to this fire of hatred.

If this how a "great friend" of Israel looks like, I dread to imagine what the enemy will be.