One of the accused brothers in court
Photo: Shaul Golan 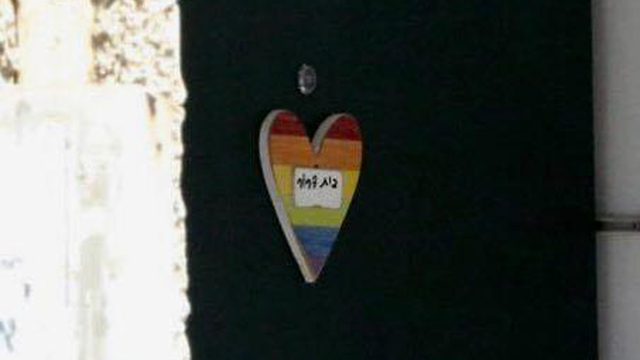 The siblings in their 20s from northern town of Tamra allegedly stabbed their 16-year-old brother outside LGBTQ youth hostel in Tel Aviv; the two surrendered to the police last month after four-day manhunt

Two men from the northern town of Tamra have been indicted for the stabbing of their 16-year-old brother outside a youth hostel for LGBTQ teens in Tel Aviv. A third man - a friend of the other two suspects - was also charged.

The names of the two brothers, aged 23 and 27, are under a gag order so as to protect the identity of their younger sibling who is a minor. The friend was named as 24-year-old Jamal Canaani. All three have been charged with conspiracy to commit murder and attempted murder.

The site of the stabbing in Tel Aviv (Photo: Moti Kimchi)

The teen was stabbed on the doorstep of the hostel on July 26 and was taken to hospital by the Magen David Adom rescue service. The hospital rushed him into surgery due to the multiple injuries he sustained.

Before being transported to the hospital, the victim told the paramedics it was his brother who stabbed him.

Both brothers turned themselves over to the police at the end of July, after a four-day manhunt.

The two brothers are also accused of injuring their brother under aggravated circumstances and issuing threats against him regarding a past event.

According to the indictment filed by Dea Ben-Assa from the Tel Aviv Prosecutor's Office, one of the teen's brothers discovered he was in a relationship with another male and threatened him.

The charge sheet states that the older brother told his younger sibling, "nobody knows it was me who shot our cousin's house, I'll shoot you and no one will know it was me," while pressing a knife to his throat. He also allegedly claimed, "like I killed other people, I don't have a problem killing you."

The indictment also claims that, "the two brothers beat the boy in front of their mother and another one of their brothers, with fists, kicks and slaps all over his body until he fell unconscious and suffered bleeding and injuries to his lips. His family tried to convert the boy's sexual preferences, sent him to a psychologist and limited his time outside of the house. Furthermore, after the teen made a police complaint in May 2019 after the attack, the accused found him, shoved him in the car with the rest of the family inside and took him home so he wouldn't be able to use law enforcement to escape them.

"In June 2019 after repeated attempts by his family to change him and his sexual preferences, and facing real immediate danger to his life from his brothers, the teen moved to the Beit Dror youth hostel in Tel Aviv (which houses young people disowned for their sexual preferences). After his arrival, the court decided to house the teen in the youth hostel under a court order, and he was given a state-appointed legal guardian."

Certain individuals in the hostel say the teen stayed there for about a month and during that time was under constant threat from his brothers. The same individuals also claimed that welfare officers were aware of the situation. Even so, the teen has stayed in touch with a few family members.

Ohad Hizki, the CEO of Aguda - The Israeli National LGBT Task Force said: ''We welcome the indictment and look forward to seeing the full extent of the law pursued. These days, when there is such wild sedition against our community in Israel, sedition that also comes from those in government and from those in other hateful political parties, the violence won’t stop.

"No girl or boy deserves to be stabbed just because of his or her sexual preferences and orientation. We all have the right to live our lives in security and without fear, we will continue our fight until we have full equality of rights, we stand with the boy in these trying times."