Strike on Iraqi base 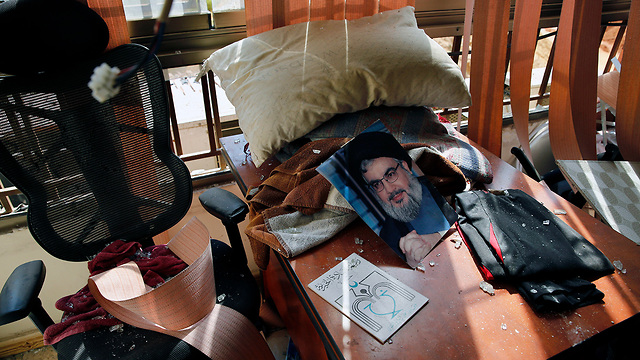 Lebanon's president says country now allowed 'to resort to our right to defending our sovereignty,' while powerful bloc in Baghdad coalition parliament, which represents Iranian-backed militaias, calls for U.S. army to leave Iraq after series of airstrikes attributed to Israel

Lebanon's President Michel Aoun on Monday said his country had a right to defend itself after alleged Israeli drone strikes that were like a "declaration of war." His comments came as a powerful bloc in the Iraqi coalition government made a similar statement.

An image of Hezbollah leader Hassan Nasrallah is seen in the rubble of a building hit by what Lebanese officials and the Iranian-backed group said was an Israeli drone (Photo: AP)

Two drones crashed early on Sunday in Beirut's southern suburbs, which are dominated by Hezbollah, prompting the Iran-backed movement to blame Israel and warn Israeli soldiers at the border to await a response.

Meanwhile, the Fatah Coalition in Iraq's parliament called Monday for the withdrawal of U.S. troops from Iraq, following a series of airstrikes targeting Iran-backed Shi'ite militias in the country that have also been blamed on Israel.

The Iraqi bloc, which represents Iran-backed Shi'ite paramilitary militias known as the Popular Mobilization Forces, said it holds the United States fully responsible for the alleged Israeli aggression, "which we consider to be a declaration of war on Iraq and its people."

The coalition's statement came a day after a drone strike in the western Iraqi town of Qaim killed a commander with the forces -- the latest in strikes apparently conducted by Israel against the Iranian-backed militias in Iraq. It added that U.S. troops are no longer needed in Iraq.

The funeral for the PMF commander killed in an Israeli alleged airstrike in Iraq (Photo: EPA)

The Shiite militiamen, meanwhile, held a funeral procession in Baghdad for the commander killed Sunday.

"There is no greater God but God!" the mourners shouted as they marched behind a banner with the words "Death to America" and "Death to Israel." Some trampled on an American flag as they marched.

Anger is mounting in Iraq following a spate of mysterious airstrikes that have targeted military bases and weapons depot belonging to Iran-backed militias. The drone attacks have not been claimed by any side but U.S. officials have said Israel was behind at least one of the attacks that killed two Iranian commanders on July 19.

The aftermath of a strike on a base near Baghdad

The Shi'ite militias have accused Israel of the attacks, but held its ally United States ultimately responsible. The attacks are threatening to destabilize security in Iraq, which has struggled to remain neutral in the conflict between Washington and Tehran.

"These strikes won't break us, they'll make us stronger," the militias' Lt. Gen. Hussein Abed Muttar said at the funeral.

Along with the commander, another member of the Shiite militia was also killed in the drone attack on Sunday evening near the Qaim border crossing with Syria. The attack targeted vehicles belonging to the Hezbollah Brigades faction, also known as Brigade 45, which operate under the umbrella of the state-sanctioned Shiite militias.

U.S. forces withdrew from Iraq in 2011, but returned in 2014 at the invitation of the government to help battle the Islamic State group after it seized vast areas in the north and west of the country, including Iraq's second-largest city, Mosul. A U.S.-led coalition provided crucial air support as Iraqi forces regrouped and drove IS out in a costly three-year campaign.

The U.S. maintains about 5,000 troops in Iraq, and some groups say there's no longer a justification for them to be there now that IS has been defeated.

"While we reserve the right to respond to these Zionist attacks, we hold the international coalition, particularly the United States, fully responsible for this aggression which we consider a declaration of war on Iraq and its people," the statement by the Fatah Coalition said.