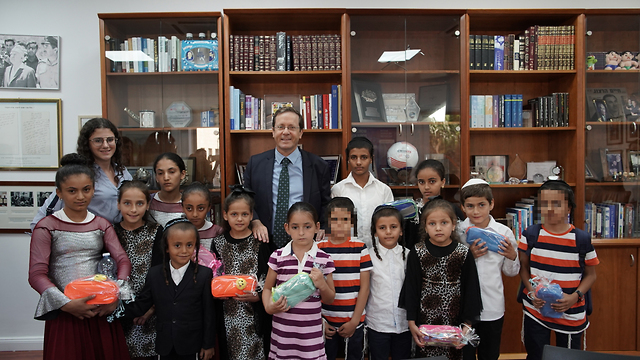 31 children whose families made aliyah in total secrecy from hostile countries are among 2,000 kids from 37 countries embarking on a new chapter in their educational lives; 'May you feel safe here, in your country,' says Jewish Agency chair Isaac Herzog

More than 2,000 children and teens from 37 countries who made aliyah this summer with assistance from the Jewish Agency for Israel will enter the Israeli school system for the first time on September 1, at the start of the new academic year.

Among them are 31 Jewish children who made their way to Israel with their families in complete secrecy, in covert Jewish Agency operations, from countries with hostile relations with Israel.

According to the Jewish Agency, around 1,450 of the young new immigrants who will start their first school year in Israel are children and teens aged 6 to 17, who will join elementary schools, middle schools and high schools.

More than 550 are children aged 3 and over who will go into preschools and kindergartens all over the country.

The countries with the greatest number of new immigrant children are Russia (around 880), the United States (around 400), France (around 270) and Ukraine (around 150).

The new pupils also come from less common countries such as Armenia, China, Thailand, Cyprus, India and Panama - as well as the countries that must remain confidential.

With the new school year approaching, Jewish Agency Chairman Isaac Herzog met in Jerusalem with some of the children and families who came to Israel in secrecy on covert Jewish Agency operations, from countries with hostile relations with Israel.

Herzog provided them with school supplies and advice about making new friends and being successful in their studies.

“You all came in the last few months from countries that are very complex, and we are very happy that you are in Israel,” Herzog said.

“We all want to wish you a most successful school year. May you feel safe here, in your country, in the holy land, in the State of Israel. You are continuing a legacy of generations and we are very proud of you.”

A 14-year-old girl who made aliyah to Israel last month from Venezuela – which in the past year has experienced political upheaval that threatens the Jewish community there – spoke about her arrival in Israel.

“It’s not good now in Venezuela but it’s a beautiful country. I love Israel and people have everything they need here,' she said.

The teen will be starting school in Ashdod, and said that going to a new school is “difficult, but feels good to be doing so in Israel. I have a lot of friends in the Beit Canada Absorption Center. I have friends from Venezuela, Brazil and lots of countries. It’s good to be here.”