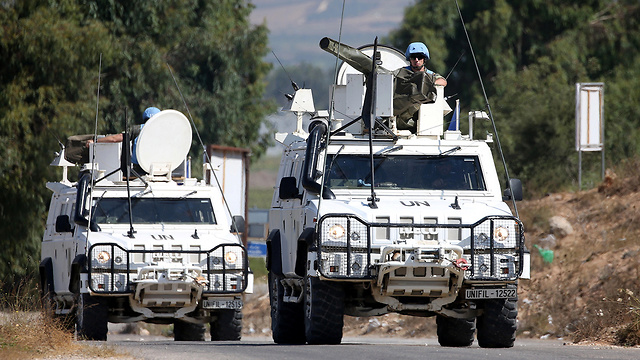 With tensions high, Israel and the United States hope a revised mandate will grant United Nations troops better access to areas where Hezbollah is believed to be building its military strength in violation of UN resolution that ended 2006 war

The United Nations Security Council is to meet Thursday to vote on reinforcing UNIFIL, its multinational peacekeeping force in southern Lebanon.

Israel and the United States are spearheading a call for a change in the UNIFIL mandate, including greater freedom of movement for its inspectors and providing real time reports on violations of ceasefire agreements by the Iran-backed Hezbollah organization.

UNIFIL peacekeepers on patrol near the Israeli border in South Lebanon (Photo: Reuters)
Israeli officials claim the current mandate prevents UNIFIL peacekeepers from accessing certain areas where terrorist activities are believed to take place, in violation of UN Security Council Resolution 1701, which brought an end to the 2006 Second Lebanon War.

On Wednesday, Fox News showed footage filmed last year of groups of men blocking off the UNIFIL convoy with their cars. Several men the set upon the vehicles, trying to break in through the windows with hammers and stones," The network reported adding that the U.N. had described the attack as one of the “most serious incidents involving UNIFIL personnel in recent years.”

Tensions on the Israeli-Lebanese border continue to spiral as the Lebanese army on Wednesday claimed it fired on at least one Israeli drone in the skies over southern Lebanon.

This comes after two other drones crashed over Beirut on Sunday that targeted what was described by the Times of London as a site believed to contained machinery to mix high-grade propellant for precision missiles.

Aftermath of a drone exploding near a Hezbollah communications site in Beirut (Photo: AP)

Hezbollah chief Hassan Nasrallah vowed in a televised speech after the alleged attack on Sunday that his organization will "blow Israeli drones out of the sky" if they were to violate Lebanese air space.

The IDF is maintaining a high alert along the border with Lebanon and has restricted civilian air traffic in the area.