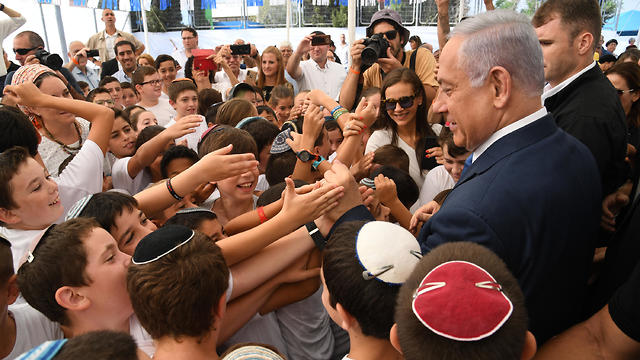 Israel's free press is under assault from its prime minister

Opinion: Netanyahu urged Israelis to boycott Channel 12 purportedly for involvement in controversial HBO show about Israel; but make no mistake, it wasn't broadcasting 'Our Boys' that was the problem, it was the damning testimony against the PM

One could have expected Prime Minister Benjamin Netanyahu to learn something from the tragic outcome of the incitement that lead to the murder of Yitzhak Rabin in 1995 and one could also have expected him to learn from his mistakes at the Communication Ministry, mistakes that led him into criminal allegations. Unfortunately, Netanyahu refuses to learn. He believes that everything is permitted, that whatever he does will be forgiven.

Prime Minister Netanyahu celebrates the opening of the school year in Elkana, West Bank (Photo: Haim Zach, GPO)
Over the weekend, Netanyahu wrote a post calling on Israelis to boycott Channel 12 over its involvement in an HBO series on Israel that displeased him. But let there be no mistake: It isn't the series that roused the prime minister's ire - it was the testimonies against him in criminal cases in which he could soon be indicted.

Guy Peleg, the Channel 12 legal correspondent, is the latest victim of the prime minister and his merry band of followers.

Peleg is not a political rival of the Likud Party; he was only marked for targeting since he published parts of the testimony against Netanyahu given by Shlomo Filber, Netanyahu's former wing-man in the Communication Ministry, who has since turned state witness in Case 4000.

This testimony is inconvenient for Netanyahu, so incitement against the messenger is allowed. And thanks to this incitement, Peleg has been receiving threats to the extent that his place of work had to hire security guards to protect him. The intention behind the threats is clear. Its aim is to silence Peleg or get his employers to silence him, or to simply brand his Filber scoop and his and his colleagues' work as politically motivated and therefore discredited in the public's eyes.

"A propaganda channel," Netanyahu's supporters call a media outlet that is simply doing its job.

And Netanyahu should know a thing or two about propaganda outlets - he has his own in the form of Yisrael Hayom (Israel Today), the free newspaper that he controls thanks to the generous support of American Jewish casino mogul Sheldon Adelson.

This act by Netanyahu should be called by its name. It is an assault, and a dangerous one, on the freedom of the Israeli media.

It includes not only the delegitimization of journalism, but also threatens the lives of journalists and calls for boycott of media outlets who have fallen from favor.

The media in Israel is a highly competitive field, with business and personal quarrels and ample mistakes. Israel could definitely learn from the U.S. in times like this.

There too, the media is under a wild attack by unbound politicians. But in the U.S., they are not afraid of fighting back. And when attacks come from the outside, they maintain a professional solidarity, something journalists so desperately need in Israel.